The unique setting of Newquay Golf Club makes it an iconic coastal landmark. With Cornwall's glorious surfing destination, Fistral Beach as backdrop, it sits high atop the cliffs overlooking the Atlantic Ocean. 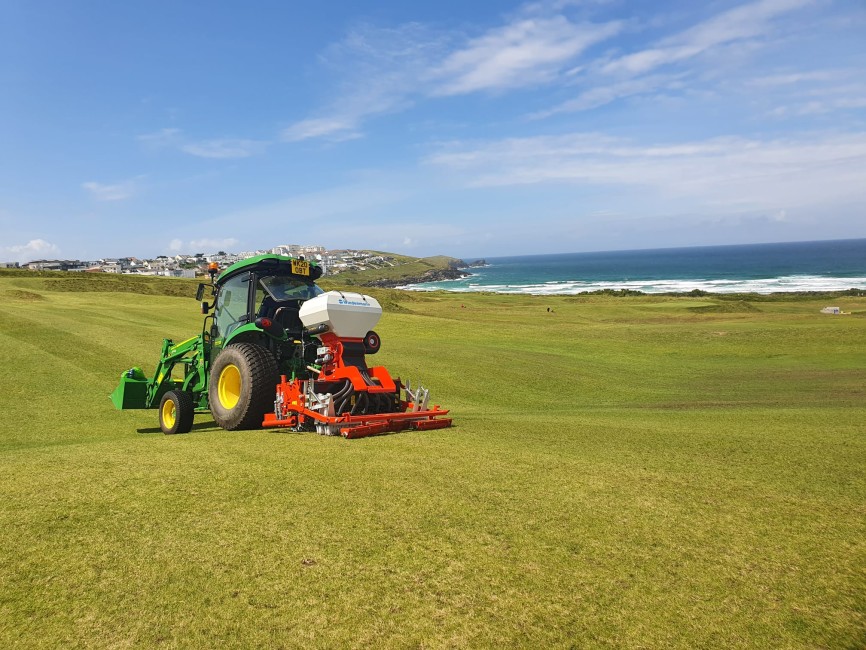 For Dan Kendle, Course Manager, at the Harry Colt-designed links, summer has been as hectic as anything he can remember.

"There's certainly not been much down time," he admits. "It's been mental for the last 18 months. The town has been so busy; actually, sometimes too busy, for infrastructure to cope."

"In the past, the club has never had vast numbers of groups of visiting golfers, just a steady membership made up of locals. However, tourist golfers are loving it. There have been days when there hasn't been a single tee time available from seven in the morning through to six at night. We imposed a cut off at 7.00 pm for people as we literally can't fit any more."

Extra funds have meant Dan Kendle has bought a Wiedenmann Terra Float Air pneumatic seeder, delivered in September, something on his wish list for the last 6½ years since taking up post.

"We've never really had a proper overseeder, just a basic one. I considered two or three contenders, spoke to David Barnes at dealers, Mason Kings and narrowed it to the Wiedenmann. I chatted to other links managers who had bought the Air, including Paul Larsen at Royal St George's. He couldn't say enough good words about his... that was good enough for me … I had the demo and it backed up all I'd heard."

The Terra Float Air combines three units in one. A base unit aerates and prepares a seed bed to a max depth of 30 mm by way of fine slits or spikes. Then the top-mounted pneumatic air seeder accurately distributes the seed either pre or post top dressing. Finally, a brush and roller combination gives a desired finish incorporating the materials and leaving the surface smooth. Thanks to finitely accurate electronic static calibration, quantities as low as 1.0 g / m² can be achieved.

Having had his Air less than a month, Dan, and his team of four full timers, have decided to try a few schemes to see what works best.

"In the past, we really only overseeded greens twice a year and annually some fairways. This involved putting a blunt tine in the greens and the seeds via a broadcast spreader, but this is a different league. Going forward, we will start off overseeding greens probably every six weeks just lightly and see where that takes us. We'll keep pushing the fescue low, maybe 4-5 grammes per square metre on greens and surrounds. Tees will be two or three times a year while Fairways once or twice a year, up at about 8 - 10 grammes. Then we'll review. We'll be using Limagrain's MM Coastal mix fescue, something also relatively new for us.

"It's easy to get the Air on the tractor. The stored electronic memory feature is one of the brilliant details. Once you input your programme you don't have to touch it again.

"Even before it had arrived word had got out that Air was on its way and a few nearby course managers have already asked if we will be hiring it out. We also own a Wiedenmann GXI8 HD deep aerator and the Terra Float Air are both very similar as they are totally reliable, and we can use them in every area of our course."

David Barnes, at Mason Kings, Wiedenmann UK dealers for Cornwall, said: "The Air also has an assured performance on undulations with good forward speed and leaves a very clean surface. The beauty of the Wiedenmann is that it respects that seed is a very precious and expensive commodity and meters it so precisely there is no wastage. These days that is a big saving and brings peace of mind to a club or a contractor. With a much busier course, Dan and team can be out in a matter of minutes when opportunity allows."