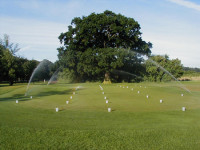 Although it may be hard to imagine as you read this, but some of you will this summer, be struggling for water. It seems that every year the well runs a little drier and the threat of global warming looms a little larger. We never really miss water and to a certain extent the climate in the UK is on our side, so… we may have to go a couple of weeks but on the whole we know that rain is probably around the corner.

Uniformity
An irrigation system that does not apply water evenly will cause problems; this is referred to as the Uniformity of the irrigation system. Today many golf courses have fully computerised automatic irrigation systems; these systems can calculate and inform the turf grass manager the application rates, run times and even fault find. They allow the manager to quickly change irrigation head run times or to have several irrigation programs stored to allow for quick changes to the system in response to changing environmental factors. Yet for all of this flexibility, the uniformity of the application is unknown and first indicators that all is not well may be at the first signs of the death of the turf grass.

At present, uniformity does not cross the minds of those in control of the irrigation system, especially when rainfall is usually adequate or when water availability is not an issue. This however; is rapidly changing.

An irrigation system which delivers water uniformly will not only save money but, in sports surface management terms, ensure the consistency and playability of the surface. Irrigation uniformity is an important factor in agriculture where most of the research has been carried out, the effects of irrigation uniformity on crop yield has been well researched and documented.

While golf courses and sports grounds are not huge users of water in the wider context, they are a very public user and in some respects an easy target, this alone means that irrigation use at these facilities, needs be seen to be respecting the wider environmental issues of applying thousands of litres of water in a season.

Modern construction methods applied to the majority of golf courses and major stadia built in the last few years coupled with the use of predominantly sand based root-zones, has increasingly seen irrigation used as an important management tool for maintenance.

With an increase in the need to apply more water there is an increase in the need to ensure that the water is actually applied in a way which guarantees that the whole of the surface receives sufficient moisture to enable the turf grass to not only survive but to provide a surface which meets the increasing demands of today's sports men and women.

The turf grass needs moisture at all parts of the growing cycle, without it, its metabolism will cease to function and the plant will die. If there is a shortfall of the precipitation rate (pr), to the evapotranspiration of the turf grass (ETT), then supplementary irrigation needs to take place.

It is however; important that amount of irrigation applied to a given area is correct, too much and the turf grass will become prone to damage, from wear, insects and disease, to little water and growth will slow and the plant will wilt and eventually die. The turf grasses need for water is variable through out the year according to environmental factors such as temperature, humidity, and wind speed and light. Individual turf grass species also have variable water demands.

There is therefore, a need for the irrigation system to deliver the correct amount of water to the correct place, to ensure that the surface remains uniform and playability of the surface is maintained at acceptable standards.

Irrigation uniformity is important, and is founded on a basic premise; all irrigated areas receive the same amount of water. If water is not applied uniformly then some areas will receive more water than others, this then leads to several scenarios:

Following these scenarios will to a greater or lesser extent affect the health of the turf grass and produce a playing surface which may not perform to the required standards.

Although there are other methods, low quarter distribution uniformity (DUlq) is now the method most commonly used for turf grass and golf (Burt et al; 1997, Millar et al; 2003). Instead of incorporating an absolute minimum it uses an average of the lowest quarter of the amount applied.

Although the figure produced is expressed as a percentage, DU is not an efficiency term (Burt et al; 1997) and should be considered as a ratio.

Zoldoski et al; ( 1994) also argue that this method has flaws stating that the location of the Low Quarter may be in a single area within that belong irrigated or may be made up from several smaller deficit areas. If however the figures are recorded in the location from which they are taken then this information can be almost seen at a glance. Therefore providing accurate recording is carried out, this problem may be overcome and closer examination of the system becomes possible.

Ascertaining the uniformity of application of the system is therefore critical to ensuring the good health of the turf grass and the playability of the surface and doing so in a cost effective way in terms of both financial and environmental considerations.

Good irrigation systems should have a distribution uniformity of 90%. It has been accepted that a DU of 100% is impossible to achieve, (Solomon 1990, Burt et al; 1997, and others), all arguing that even rainfall does not achieve a uniformity of 100%. In their study on golf course irrigation uniformity, Miller et al; (2003) stated that DU values of 80% had been set as achievable for golf courses by the American Irrigation Association.

How to Carry out a Survey

Catch-cans are placed at 3m centres across a golf green in a grid pattern. 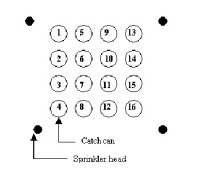 The catch cans, can be any type of container as long as they all have vertical sides, with a thin edge/mouth and the diameter of the opening needs to be identical, -try baked bean or soup cans - depending on taste. To prevent the containers being knocked over by either the wind or the water stream, put golf balls inside the containers. Although you should not do this test if it's too windy, certainly no more than 5mph.

Irrigation heads/ valves should be operated in the same pattern as they would be during a normal irrigation cycle and run sequentially if required; this will ensure the test cycle is as close to operating conditions as possible (Wilson and Zoldoski 1997). Run the system for double your normal irrigation cycle to ensure you have enough water in the cans to record it.

Pour the water collected in each container into a measuring cylinder and record the figures. It will help identify problems if there is a sketch made of where the measurements were taken from.

You can then calculate the Distribution uniformity: 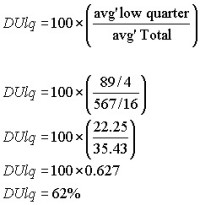 The resulting value, in this case 62%, will give an indication of the uniformity of the applied water to the surface. If as stated earlier, that 80% is classed as "achievable" it should come as no great surprise to find that your system will fall below that level. 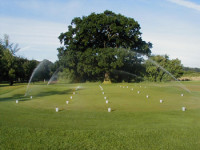 There are several reasons why the uniformity could be low, but the likelihood is, is that it will one, some or at the very worst, all of the following:

*Pressure variations may not be attributable to something as major as pump problems it could simply be a blocked or damage filter.

At least one study (Ainscough and Kiker 2002), has shown that well maintained irrigation systems, operated correctly generally have a high and acceptable DU.

The uniformity of application of the irrigation water can be effectively checked via a fairly quick and simple method, it may pinpoint where problems lie and if corrected should save both money and of course a valuable environmental resource, that some day we may all be wishing for more of… water.