0 California Dreamin' thanks to OSU programme 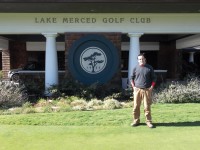 After spending nearly six years in Adare Manor, which included two Irish Opens and two JP McManus Pro Ams, the time had come to move on. So, I sent an email to Mike O'Keeffe at The Ohio State University International Exchange Programme explaining my story. From the very beginning, Mike was great in explaining how much would be expected of me if I took part on the programme, and that this would be the biggest test of my career thus far. After some planning, and a short conversation with my new Superintendent, Zach Ohsann, my host golf course was confirmed as Lake Merced Golf Club in the San Francisco Bay Area.

I arrived in San Francisco at the end of May 2011. The golf club is located in Daly City, which is about ten miles south of downtown San Francisco. Zach had taken over here at the helm from the previous super at the beginning of April. Realising that the previous super had just retired after forty-six years of service, I was pleased to hear of Zach's immediate plans to change more than a few things, both agronomically and non-agronomically.

During my first few days here, I began to familiarise myself with the course and the crew. The course itself was originally designed by Dr Alistair McKenzie and has gone through a few design changes since then; by Rees Jones in 1996 and a greens renovation in 2010. Lake Merced is a beautiful golf course set amongst some of the most magnificent pine sand Monterey Cypress trees one could imagine. The crew consists of twenty, each of them bringing with them their own unique culture and ethnicity. As you can imagine, the canteen in the morning is an interesting place to be with such diversity and different languages filling the air.

Immediately, Zach and I set about setting our goals for the remaining six months of the year, the most important of these being an aeration programme, whereby light, but frequent applications of sand topdressings are performed on the greens, approaches and tees.

With the USGA Girls' Junior Championship scheduled for July 2012, it was imperative that we implement an intense topdressing programme to all surfaces. Hollow tine or solid tine aeration is to be kept at a minimum, so topdressing with our double screened USGA specification sand will help us dilute the thatch layer that is accumulating beneath the turf, and also keep surfaces as firm as possible. We follow a similar aeration programme with our tees and approaches, with minimal disruption to play being key. Some of the most important things I have learned from Zach already are to always have a plan A and a plan B, record everything and, most importantly, take pictures of everything! 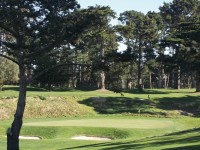 The weather here in Daly City is pretty amazing. When I was packing a bag to come from Killarney to Northern California, I anticipated many necessities, such as shorts, t-shirts, and plenty of sunscreen. Well, I soon discovered that sunshine certainly is not the norm here! During the summer months of July and August, the fog sits out in the bay and, when it gets pushed in by the warm sea air, the area becomes submerged in fog. This fog may persist for days, even weeks at a time. Quite often I find myself having to change into dry clothes at lunch time for the remainder of the day. It's amazing!

This mild, damp weather obviously increases disease pressure. It's not unusual to apply fungicides on a bi-weekly basis.

Another project under my responsibility was to become familiar with the pesticide products, and to create a rotation system so that no strains of pathogen become resistant to any fungicide. At this moment in time, we have a rotation with ten different fungicides.

I have learned many things during my term at the club regarding the expectations of playing conditions in America. The most significant is the quality of the putting surfaces. At first, the expectations seemed unreasonable; maintaining a stimp reading of 11.5 to 12 feet on a daily basis, regardless of weather.

However, in collaboration with the superintendent, we have managed to achieve this goal using a low fertility programme and growth regulators. The fertility programme is unique in that our goal is to keep the plant as lean as possible without sacrificing turf health. Therefore, we constantly monitor soil test reports and supplement accordingly using custom nutrient blends from a local distributor.

Of all the struggles we encounter in our effort for superior putting surfaces, the most significant is limiting the establishment of Poa on the bentgrass surfaces. In 2010, the existing USGA greens were renovated from Poa annua to bentgrass. The Poa surfaces were stripped and the top four inches of sand was removed. The surfaces were restored with four inches of USGA specification sand and a bentgrass blend of Tyee, T-1 and 007. Given the fact that the microclimate of the San Francisco Bay Area is conducive to Poa, the relentless battle between Poa and the greenkeeping staff continues to rage on daily.

I can safely say that the weather affects our decisions by the hour during the summer months. The fog has the potential of being socked in all day and night, or breaking at 12.00 midday, which forces us to redirect our efforts of the day to managing wilt. 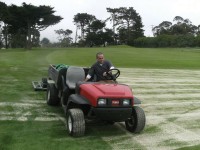 The course is closed on a Monday of each week, which allows us a maintenance day, which is great. So, on a Sunday around midday, I'll set the computer to perform an irrigation cycle that night to soak the entire course, sometimes applying more than 500,000 gallons of water to a property of just 136 acres. Deep and infrequent is the motto!

Then, on a Monday, I can cruise the course and turn on irrigation heads individually if any areas need more water than others.

The crew is divided into sections. So we have the guys who will take care of the mowing, blowing and other machine operated tasks, and then we have four guys who look after their section. We have the 18 holes and practice facilities divided up into four sections. Each section requires one maintenance employee who is tasked with the management of every inch of their section.

Amongst other things, these employees are constantly probing to investigate soil moisture levels, probing the sand depth in the bunkers to make sure there is an adequate amount of sand in each, and ensuring that the tee plates and yardage markers are clean. Attention to detail is key for these guys. For instance, if there is some wilt on a green surround, or even a green itself, the guys will get out their 100 foot hoses and hook up to a quick coupler connection and address the wilting area. When I was preparing to come to the USA, my biggest fear was landing a job at a big-budget private club whose only goal was to recreate the Disneyland experience. The superintendent, who spent three years at Augusta National as an Assistant Superintendent, and an additional three years as the Superintendent of the Olympic Club's Ocean Course, prefers the traditional mowing patterns where a 50/50 cut is performed on tees and fairways and in the rough as well.

As regards playing conditions, firm and fast is the key and, in no way, should aesthetics influence quality turf. It's great to see that the more traditional style to course maintenance still exists where the golfer needs to be able to play all types of shots.

Scheduling is an essential aspect in such an intensive environment. Each Sunday, we sit down and discuss our week ahead and try to come up with a schedule as best we can, knowing it will change fifty times by the Monday afternoon! The bunkers are hand raked fully twice a week, depending on play, and touched up on the remaining days of the week. Green surrounds are mown using a Toro Sidewinder, and must stay well away from all bunker edges as, around each bunker, we have anything up to twelve pop up sprinklers.

The course's design of drastically sloping bunker edges presents us with many maintenance challenges. Perhaps the most significant is the pedestrian mowing of the green surrounds that the Toro Sidewinder is unable to mow.

Everything must be neat, tidy, and presentable. Perception is everything here in America and, if something is not done to the standard expected, it will be noted and presumed something is wrong.

It's important that we all help each other as a team to achieve the high standards that we have set. Another thing I have learned from the superintendent is to set your standards and expectations as high as they can be. As managers, it is our obligation to motivate the staff to achieve these high results.

If provided the opportunity, I would encourage everyone to take part in the International Exchange Programme of The Ohio State University. Mike O'Keeffe has been a great help to me since I arrived. I am fortunate for Mike's responsiveness in answering all of the questions and concerns that I have had throughout this journey - both before my arrival and currently - he owes me a beer after Kerry defeated Cork in last year's Munster final also, 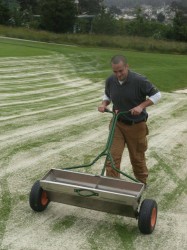 I might add, I've learned so many different aspects of golf course management. Whether it is a complete green construction, irrigation repair and maintenance, or staffing issues, it's all part and parcel of learning the industry inside out. The thing I love out here is that you are exposed to everything. The superintendents here in the USA seem to throw you in at the deep end and see how you cope. Once they spot your areas of weakness, they will work with you to set your own personal standards and goals, and support you in becoming a better person, and a better person for the job.

Zach has taught me numerous things since I arrived here, which I know will stand to me in good stead in the coming years and follow through into the next chapter of my life in this industry.

I have been lucky enough to come across some good superintendents along the way, from Alan McDonnell in Adare Manor and David Mcindoe in Killarney Golf Club who, amongst other things, taught me as a young teenager that no matter how small or irrelevant a job may appear it is worth doing correctly, to my current boss, Zach.

In June of this year, I will have the honour of being able to add a US Open to my CV, as I will be volunteering at The Olympic Club here in San Francisco. In addition to this, I will be proud to have the opportunity to add my role as an Assistant Superintendent for the USGA Girls' Junior Championship, which will be held here at Lake Merced in July.

With these achievements under my belt, and a wealth of new knowledge and insight into the industry, I have no doubt that the next chapter in my story promises to be even more interesting, exciting and challenging. I look forward to it!