by Mirror Sport
in Synthetics and Football
on 30 Mar 2016 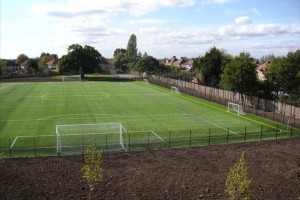 The findings have followed on from a recent report in the United States that linked cancer in 168 footballers with the 3G surfaces.

Goalkeepers Lewis Maguire, 18, from Richmond, Yorkshire, and Robbie Jones, 30, from Cardiff, have both been diagnosed with Hodgkin's Lymphoma and fear it was caused by playing on the surface, reports the Daily Record .

Samples of rubber crumb - pellets spread on the artificial turf to improve its bounce - were sent for testing by the Environment Scientifics Group and the results were passed to Professor Andrew Watterson, an environmental health expert from Stirling University.

He said: "This report confirms and reveals the presence of a number of carcinogens in the rubber crumb.

"If the chemicals and metals remain locked into the crumb, there will be no exposure. However, it seems to be fairly clear there may be some potential risk from some of these substances to sports people.

"To what extent and what effect carcinogenic compounds may be taken up through inhalation, skin absorption or ingestion and under what conditions remains the big question."

The rubber crumb, which is made from recycled car tyres, has been linked to cancer clusters.

Tests on samples revealed a number of chemicals linked to poisoning, such as arsenic, lead and admium.

Polycyclic aromatic hydrocarbons - found by a 2014 US study to be "highly mutagenic cancer-causing compounds" - were also present, including benzo(e)pyrene and chrysene.

A 1993 study into benzo(e)pyrene said the substance promotes tumours forming on skin. And in 1978, experts found exposing mice to chrysene led to a huge rise in tumours.

Amateur goalkeeper Robbie, diagnosed a year ago after playing on 3G three times a week for 12 years, wants a ban on building new pitches.

Robbie said: "If there's any evidence the stuff could be harmful there should not be any more built until it is investigated.

"Kids play on them and I think parents should think twice about that."

The Sports and Play Construction Association, who represent the artificial pitch construction industry, could not be contacted.

However, the industry have previously slammed health fears, citing independent studies which say rubber crumb is safe to play on.

Although there are alternatives, such as coconut husk, rubber crumb is used in about 90 per cent of the UK's artificial pitches due to the low cost.

The safety labels on rubber crumb products warn workers laying pitches not to breathe the vapour and avoid skin contact.

For the original article, visit www.mirror.co.uk.

For Peter Britton's recent article on rubbercrumb, see Rubber Crumb- Is it the new asbestos?