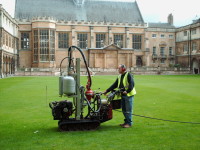 The Head Gardener at a Cambridge University college is conducting a unique experiment in a bid to combat the effects of global warming.

George Thorpe who has been Head Gardener at Trinity College, Cambridge for 15 years has been interested in climate change since 2002. "As gardeners there are probably as many pros as cons," he says. "With the rise in temperatures we can now grow plants which before would have been too tender to survive. Our grass in the courts is another matter. We have light, alluvial soil with quite a high gravel content and it's very free draining. Thinking back to the summer of 2006, after two weeks without rain the lawns started to lose their colour, which lets down their role as a foil to the splendid historic buildings. We had a choice of either doing something to the rootzone or increasing our irrigation. Given that the regional demand for water is increasing we decided on the former."

Two years ago one of the lawns had to be re-laid and the college took the opportunity to incorporate a water holding material into the rootzone. Although, due to the weather George hasn't been able to assess the success of this venture he has initiated a comparison study using a similar material.

Terrain Aeration, called to the college to perform one-metre deep, compressed air de-compaction treatment, also injected water-storing polymers on the final air blast, using dried, milled seaweed as a carrier. Terrain's M D David Green says that the combination of the aeration treatment, which opens up the subsoil creating fractures and fissures to a depth of one metre, and the dried, milled seaweed, which not only swells when wet, keeping the newly created air channels open, but also evenly distributes the water storing polymers, is good insurance against possible drought. "This combined treatment means that any future rainfall can penetrate the subsoil easily and fill the water storing polymers," he says. "These expand to form open lattices and spaces that trap water molecules and act like mini reservoirs, absorbing water during rainfall and releasing it during periods of drought."

"They did the whole of Neville's Court, where we hold the May Ball and the Graduation reception," George Thorpe continues "and one of the six lawns in the Great Court. Another lawn received aeration treatment only, without the water storing polymer injection. I'm hoping that this summer's weather will give me the chance to compare the two lawns under drought conditions and decide if the added ingredient, injected into the subsoil helps the grass to survive."

For further information on Terrain Aeration contact the company on Tel: 01449 673783 or visit their website at: www.terrainaeration.co.uk