Following the recent promotion from the Conference Premier to the Football League for the first time in nine years, Cambridge United FC have purchased a Dennis G860 professional mower complete with a range of interchangeable cassettes to maintain the high standards set by award winning head groundsman Ian Darler. 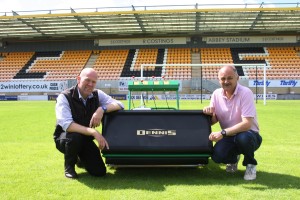 Following a recommendation from friend Gary Kemp, who is head groundsman at Norwich City that he should look at the Dennis machine, Ian took the decision to organise a demonstration.

"I'd been using a different manufacturer and machine for the past 20 years, but the weight of it was causing compaction issues and actually turned out to be double the weight of the Dennis G860," explained Ian. "Gary knew I was on the look-out for a new mower and said that you won't get better than Dennis and the G860. It's used by the majority of groundsman in this country so we can't all be wrong."

After a career spanning 35 years and winning numerous groundsmanship awards whilst at Cambridge, Ian knows that presentation will be paramount now that the club has won promotion back to the Football League. "The Dennis machines have always been renowned for the quality of the stripes that they produce along with the flexibility that the interchangeable cassette system offers - something else that interested me as it enables me to carry out numerous tasks using just one machine - perfect for us here at Cambridge."

Ian opted for the 8-blade cutting cylinder cassette for his new Dennis G860 because of the volume of cutting required along with the verti-cutter cassette, which according to Ian, used once a week will control thatch during the playing season. "Presentation is very important to me and using the G860 means I won't have any worries. It's solid, well-balanced, but light weight, and achieves excellent results."

The Dennis G860 has six quick changeover cassette options giving ultimate flexibility and a single power unit for many day-to-day maintenance tasks including scarifying, verti-cutting, brushing, spiking and slitting as well as cutting. This versatility coupled with low ground pressure, at just 166kgs, and manoeuvrability makes the G860 the first choice for many top sporting venues around the world including World Cup Finals and European Championships.

"From the first time I spoke to Dennis to enquire about their mowers to today when they delivered it; I've received a first class service. It's been a long time coming getting this machine due to funding but I couldn't be happier," said Ian.