Campaigners have lost their bid to challenge the lifting of a ban on the use of "bee-harming" pesticides in four English counties. 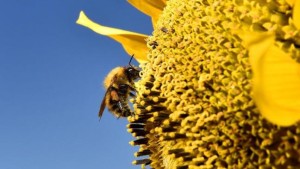 Environmental group Friends of the Earth (FoE) were refused permission to apply for judicial review of a decision in July allowing farmers to drill oilseed rape seeds coated with two neonicotinoid pesticides this autumn.

A judge ruled their case "unarguable on all grounds".

An EU-wide two-year ban was put in place after some studies showed the pesticides caused significant harm to bees, but Environment Secretary Liz Truss used emergency powers to partially lift it.

FoE said more than half a million people have signed petitions against the move.

The Government authorised a 120-day easing of the ban in Suffolk, Cambridgeshire, Bedfordshire and Hertfordshire after the National Farmers Union (NFU) said cabbage fly stem beetle attacks were likely to threaten crops.

FoE accused the Environment Secretary of taking an unlawful approach to the emergency authorisations.

Gerry Facenna, appearing for FoE, said at a recent hearing that the application for judicial review would be an important test case concerning the protection of bees and other pollinating insects.

Although it was too late to stop the pesticides Modesto and Cruiser OSR being used this autumn, it was clear further applications would be made to use neonicotinoid products next year, he said.

Mr Facenna argued that, under EU regulations, emergency authorisations could only be granted in "special circumstances" where a danger to crops "cannot be controlled by another reasonable means".

He told Mrs Justice Patterson the Environment Secretary had failed to satisfy the relevant tests and the regulations were being unlawfully circumvented.

But the judge disagreed, saying the minister was "entitled to give appropriate deference to the expert and scientific evidence before her and make her own judgment as to whether special circumstances existed".

The judge concluded: "I find this case unarguable on all the grounds that have been the subject of oral argument before me. The application is dismissed."

For the full article, visit home.bt.com.