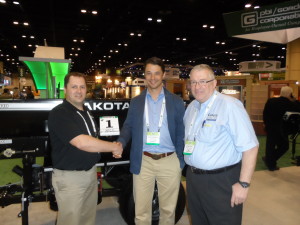 Dakota Peat and Equipment, based in North Dakota, USA, celebrated its 15th year at the recent GIS exhibition.

GT Equipment is the Campey Distributor for Germany and Austria. It also won the Campey European Dealership award for outstanding sales and service in 2013 for the second year running.

The Dakota award for best UK dealer was presented to Sandy Armit; Managing Director of Double A Trading Company based in Fife. Double A was also winner of the Campey UK Dealership Award for 2013.

A Dakota Award is given to the dealership which has delivered the best sales and service of Dakota products in Europe and the UK, throughout the previous year.

"All of our dealers work extremely hard to reach very ambitious sales targets," said Richard Campey. "Both GT Equipment and Double A have an excellent team of sales and service engineers and thoroughly deserve this recognition.

We are delighted that they have received an additional award for their work on behalf of Dakota, as well."

Campey Turf Care Systems is a European and in some instances a global distributor of new equipment for some of the most respected grounds care machinery manufacturers including Dakota, Imants, Koro, Raycam, Vredo, Omarv, Votex and Air 2G2.