by Charmian Robinson
in Football
on 15 May 2010

0 Campey and Imants combination takes off 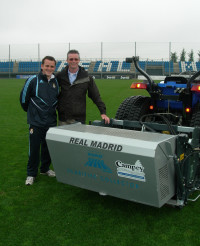 Campey and Imants combination looks set to defy recessionary influences by expanding their network of dealerships around the world.

Campey Turf Care Systems has signed up new dealers in several countries and are looking to encourage more companies to join them in promoting sales of Imants and KORO by Imants products around the world.

In February this year the close association between Campey Turf Care Systems and Imants in the UK was consolidated further with Campey's being appointed official distributors for Europe, the Middle East and Africa.

This association is proving to be a winning combination as in subsequent months interest in the Imants range of products has far exceeded expectations, particularly in light of the global recession.

New introductions such as the Imants Shockwave and Rotoknife have had a significant impact, bringing renewed enthusiasm and interest to an existing range of equipment including the highly successful Sandcat and Rotoblast. Likewise the KORO Recycling Dresser, Topdrain and Cultiroll will be promoted in new countries alongside the hugely popular KORO Topmaker, which already enjoys a highly respected position in the world market of pitch renovation.

When asked about the effects of the global economy on the new enterprise David Harrison, Export Sales Manager for Campey Turf Care Systems, was comprehensive in his reply: "We acknowledge the recession in principle but have approached this venture as we would at any time; with full commitment and complete confidence in the quality of our products and services. All the early signs have been exciting and we will be building on the assurance from our existing customers and the extensive new enquiries for potential sales, to move this forward."

"We are currently generating a wider acceptance and a subsequent increase in sales through sustained marketing efforts within the golf and sportsfield markets. Our other own-branded products such as Raycam Speedressers, Hi-lift trailers and Aeraseeders will also benefit from the increased market awareness."

During April and May, Campey Turf Care Systems has shown its commitment to supporting and promoting the export business with a seven week demonstration tour covering seven different countries in conjunction with its dealers in Europe. A series of full renovation and demo days were completed using the latest equipment to highlight the latest techniques in producing quality, natural sports turf surfaces.