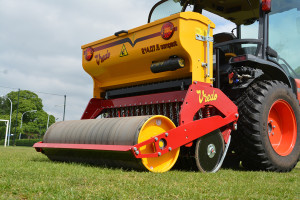 Campey have supplied three machines to Mel Pooley, who is spearheading a pilot scheme for Sport England, with a Vredo Overseeder DZ the latest machine to be purchased to expand the works offered.

The venture encompasses sports pitches in Cambridge and Huntingdon, with the aim of improving surfaces at a grassroots level, and almost 70 clubs from varying sports were covered last year.

After initially using an Imants ShockWave and Dakota Topdresser the decision was made to expand the services offered in order to provide a more complete and higher quality of work.

The program run by Sport England carries the same goals as Campey's own Pitch Renovation Tour, which also highlights the need for improvements on grassroots pitches, and Mel is adamant that the Campey machines have helped make the project a success.

"The achievements we've had so far show that using the right machinery can make a massive difference to the playing surfaces and those that want to play on them," he said.

"Having the two high-quality machines from Campey has let us make a lot of progress to the point that we've been able to purchase the Vredo so we can offer more services to the clubs.

"We started off with the Imants ShockWave and Dakota Topdresser and with those machines at our disposal we were in the position to do a lot of the work, but now we have the Vredo we can carry out a better overall job in the Spring.

"We know it will put the seed in good contact with the soil, and it has a fantastic germination rate because of it, and that's why we wanted it, teams will want to start playing in a couple of months, and you only get one chance, so that's why we have the Vredo, it stands out as a machine and we know it will provide great results."

As a pilot scheme Mel was aware that ensuring work was carried out to a high standard at the first time of asking was imperative, both for the reputation of the project and due to a lack of finance that the clubs have.

Mel has been involved since the project started two years ago and has seen a massive uptake from football, rugby and cricket, and hopes that the addition of the Vredo can help the scheme drive forward and continue to improve local pitches.

"We want to give the areas of Cambridge and Huntingdon the benefit of professional machinery used by professionals to help improve grassroots surfaces," he explained.

"We operate by providing them with a priority list starting with that they need to do, then what they should do if they have enough money, and then what the ultimate works would be if they can afford to have it done.

"But we are very careful to take into consideration that a lot of these small clubs have a lack of finance, and in some cases no money at all. We've also started seeing a lot of parish councils come on board, and we are able to take on three-year contracts, which is great for us going forward."