by Charmian Robinson
in Industry News
on 27 Sep 2012 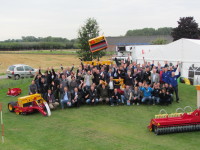 The anniversary was celebrated with two open days at their Head Quarters in Dodewaard, Holland; Thursday 20th September was attended by importers and dealers, followed by a demonstration day for end users and suppliers on Friday 21st.

Director Hans de Vree and his team welcomed guests from across the globe. This included a party from UK and European Distributors for Vredo Overseeders; Campey Turf Care Systems.

Managing Director Richard Campey presented Director of Vredo Hans de Vree and Vredo Export Sales Manager Pieter-Teunis Hoogland with a wonderful gift of a mirror etched with a photograph of a Vredo Overseeder in action at St. Andrews Golf Club in recognition of their achievements.

"We are delighted to be here to celebrate Vredo's 35th Anniversary." declared Richard "This is a tribute to the enormous dedication and hard work, which has ensured that the Vredo brand is renowned throughout the groundscare industry for innovation, quality and performance. We are proud to be associated with Vredo and look forward to many more years of collaboration."

Vredo had already started producing the now famous Vredo Overseeders in the 1970's. That initial well-designed technology of 2 sharp discs which cut a V-shaped slit in the ground and precisely places grass seed into it, is a still a winner today.

The high quality products have enabled Vredo to develop into a professional organisation that thinks purely in terms of quality and performance. They combine modern technology with recognized best practice techniques to meet the exacting demands of the professional groundsman and greenkeeper.