by Charmian Robinson
in Football
on 30 May 2014 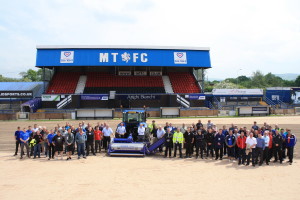 Campey Turf Care Systems carried out the processes involved in major pitch renovation, watched by head groundsman Liam Cash and more than 80 turf professionals invited by Campeys from councils, colleges, and sports facilities across the country.

The initial preparation involved koro-ing with the Koro 2000 Field Top Maker which removed the entire surface down to a precise depth of 30mm using the Terraplane® rotor with the side arm elevator channelling the debris directly into a trailer for removal, leaving a totally clean finish.

An Imants Rotosweep was used with a scarifier to remove any remaining debris, followed by aeration with an Imants ShockWave and a Koro Recycling Dresser to totally decompact the playing surface

Sand was spread with the Dakota Turf Tender and Raycam Speedresser which was then levelled with the Koro Speedharrows ready for-re-seeding, with the new 1.8mtr with 35mm seed spacings of the Vredo Supa Compact Overseeder. New Holland tractors were in operation to power the equipment.

Other activity throughout the day offered a chance to look at a range of equipment including the Air 2G2 air injection machine. 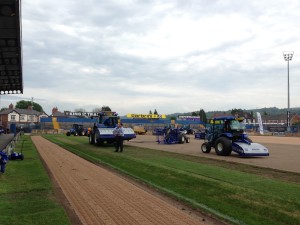 The response was overwhelmingly positive with many comments reflecting a strong desire to implement change in their own areas of operation, and introduce some of the techniques which had been on show during the day.

Liam Corcoran, Merseyside Youth Association (MYA) Operations and Business Development Manager, thanked Richard Campey for organising the event and declared that a new approach was exactly what was needed now.

"With 50 grassroots pitches in Liverpool to look after, and budgets slipping, we can't afford to keep doing what we've always done," he said.

"My main role is funding and budgets for MYA sports. I work closely with the FA and Football Foundation. I will be pressing in a big way to raise funds to purchase some of the machinery on view yesterday.

"For the price of one or two 3g pitches the FA could buy a fleet of machines to put right all the pitches in the city. We left Macclesfield with a lot more knowledge and a lot to consider for our future plans."

Greg Smith Head groundsman at Notts County FC commented "I really enjoyed the day; it gave me some things to think about regarding how we go about our renovations at Notts County."

The renovation process has been perfected by Campey Turf Care Systems over the last 15 years, leading to better quality natural grass playing surfaces that can sustain more play - and in turn bring in more revenue for clubs.

Alan Ferguson, Head of Grounds and Estates at St Georges Park - the FA national training centre - delivered an excellent presentation in his role as an ambassador for perfecting maintenance techniques for natural turf.

Clubs such as Real Madrid, Arsenal, Manchester United, the All England Lawn Tennis Club, Dallas Cowboys and many others advocate the regular use of renovation and maintenance machinery to achieve the highest pitch standards.

Macclesfield head groundsman Liam Cash said: "Campey Turf Care could not have done more to help our club. We hope that by completely renovating the surface of the pitch, it will give us a fantastic starting point.

"What has been achieved today will give us excellent foundations for the future. Our task is to ensure we maximise this opportunity to create and maintain the best pitch within our resources."

More information on all the products can be found at www.campeyturfcare.com