by Charmian Robinson
in Football
on 17 Jun 2015 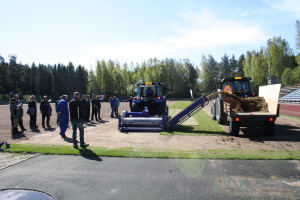 The Campey European Pitch Renovation Tour is over, but the work to improve pitches across Europe has only just begun.

The tour visited many different sports pitches including Local Authorities and local club football pitches over a five week period starting in Sweden, followed by two venues in Finland, Norway and Denmark, covering an impressive 2702 miles.

The Campey Turf Care Team assisted by its distributors across Europe delivered five complete pitch renovations to demonstrate the full impact on a natural turf pitch. A renovation consists of a number of processes and passes.

The initial preparation involves koro-ing with the Koro Field Top Maker. This removes the entire organic matter layer down to a precise depth of 30mm using the impressive Terraplane® rotor with the side arm elevator channelling the debris directly into a trailer for removal, leaving a totally clean finish.

This is then followed by an Imants Rotosweep is used with a scarifier to remove any remaining debris. Aeration is tackled with an Imants ShockWave and a Koro Recycling Dresser to totally de-compact the playing surface.

Sand is spread with the Dakota Turf Tender and Raycam Speedresser which is then levelled with the Koro Speedharrows ready for-re-seeding using a Vredo Compact Overseeder.

By showing all of the available techniques and equipment, groundsmen were given the opportunity to identify which areas of turf maintenance and or renovation were appropriate to their own facilities.

Each visitor had a unique opportunity to learn how easy it was to switch to a more effective maintenance regime. Even by adopting a few of the methods shown and incorporating them into their existing practises, they could bring about significant improvements to their sports turf surfaces.

This process of educating through demonstration and discussion is vital to the survival of natural turf playing surfaces. The groundsmen in all of the countries were eager and keen to learn how to protect and preserve the finest traditions of natural turf surfaces for future generations. 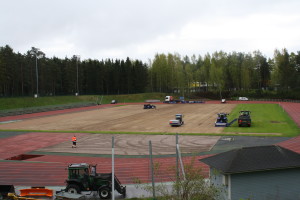 Richard Campey, managing director of Campey Turf Care Systems commented on the success of the tour. "Firstly I would like to thank our European dealers for organising the venues and visitors. Without their immense efforts these tours could not take place."

He went "Our job is to spread the word on how to achieve the finest natural turf pitches in the world in an economic way. It's now up to the groundsman to carry what he has learnt from the renovations through to his own team of groundsmen. If he does this he will see vast improvements in the seasons to come."

Details of all the products mentioned are on the Campey Turf Care website at www.campeyturfcare.com