by Charmian Robson
in Industry News, Machinery & Mechanics, and People
on 25 Jan 2017 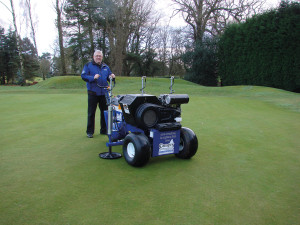 Having a deep knowledge of the industry, whilst surrounding himself with good people, has provided Richard Campey with the foundations required to build a successful company that continues to innovate and educate

Richard Campey can be justifiably proud as Campey Turf Care Systems celebrates its 30th year of overwhelming success. And nothing marks this more poignantly than they and American manufacturer GT Air Injection jointly winning the 2016 prestigious HSBC Golf Business Forum Innovation Award for the development and marketing of the revolutionary Air2G2. This illustrates exactly what Richard and his team are all about - believing that the pursuit of innovation is far more satisfying and rewarding than merely trying to replicate what others have done. It is this passion for discovery and pushing the boundaries that sets him apart and makes him, and his company, worthy of the respect and recognition of his industry and fellow professionals.

Richard has spent the past thirty years building a successful global company developing and supplying quality machinery for natural turf renovation and maintenance around the world, with machines used at venues such as Real Madrid, FC Dallas, LA Galaxy, Maryland SoccerPlex, Arsenal, Tottenham Hotspur and the golf clubs of Castle Stuart, Wisley and Gleneagles, to name but a few.

The successful partnership between manufacturer and distributor has led to the development of many innovative machines being brought to market by Richard and his team, and techniques which have transformed the maintenance regimes of groundsmen across the spectrum of turf related sports.

Equally important is his pro-active approach to educating groundsmen and women in promoting a strategy of best practice, which has helped ensure that young people have access to the best possible sports surfaces across all walks of life and tiers of sport.

Richard's 'instinct' for the turfcare business has also earned him a reputation as someone who sets industry standards. In 1997, he introduced the revolutionary Koro® machinery to the UK and Europe and has been instrumental in introducing their Field Top Maker® to the rest of the sportsturf world.

The impact this has had on the way sports pitches are managed today is profound, revolutionising pitch renovation which has led to remarkable improvements in pitch quality and extended playing hours on natural turf football pitches. To "Koro your pitch at the end of the football season" is now considered standard practice here in the UK and the rest of Europe, with awareness of the benefits increasing with each season around the world. 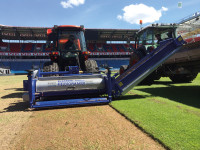 The process still is a radical approach to removing unwanted surface matter, such as poa annua, thatch, weeds or even the entire surface of natural sports turf playing surfaces like football and rugby pitches, cricket squares and outfields golf fairways and turf farms.

Richard continuously seeks out new and innovative ideas and has developed new specialised rotors for the machine. He also sees the importance in research and development with manufacturers, which led to the new Universe® and Terraplane® rotors, and investing time and money to protect these innovations with patents - four British and worldwide patents applied and granted.

It is true to say that Campey Turf Care Systems is also considered one of the most successful UK exporters of sports turf machinery. Richard Campey has taken a small local machinery dealership, selling in the north west of England such brands as Lesco, Ford (now New Holland) and Trimax, and turned it into a global force which is no mean achievement for this popular, but straight talking Cheshireman. His company has become Europe's largest independent groundcare machinery dealer, supplying equipment to countries in most parts of the world, including the most difficult markets to penetrate, such as Asia, the Middle East and, interestingly, America. 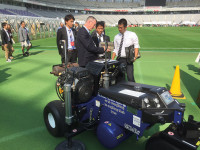 In the past few months alone, Campeys has exhibited at shows in Denmark, Germany, Italy, France and the USA. The company has supplied various products throughout Europe and Scandinavia, and as far afield as Australasia and South Africa. Most notably, the Koro Field Top Maker® was employed at various Rio 2016 Olympic sites.

What's the key to this success? Richard explains that there are fundamental issues which must be addressed to get it right.

"Firstly, you have to be absolutely clear about the products you are going to market. One of our strengths is the ability to find that niche product, and bring it to market. A very good example of this is the GT Air2G2 Air Injection machine. We discovered it in the US and now export it all around the world (excluding North and South America). It's a unique aeration product which has found a clear place in a market we already thrive in. To have won an industry award recognising our efforts with this machine is truly a proud moment in our history."

"Understanding exactly what your potential customer needs, and why, is crucial. To achieve this, you must know the industry you are in thoroughly, and we know the natural turf sports industry inside out. But it's not enough to know what goes on in the UK; you have to know the market you are exporting to and this requires local knowledge."

Richard continues; "I believe that, to create a winning formula to successfully break into a new market in a different country, you need to choose the right partnerships. In Europe, the Middle East, Asia and South Africa we have developed a strong network of dealers, supplied with products of the highest quality of manufacture and supported by marketing through shows, demonstrations and seminars which reach every corner of every country we work in."

"Our push into the USA is strengthened by the partnership between ourselves and manufacturer, Imants, and will be strengthened further in 2017 with the introduction of the renowned Vredo Overseeders to the USA market. Having the expertise, back-up and service of reputable manufacturers with existing contacts in the country you are looking to export to, is a massive advantage."

"The Campey Imants partnership goes from strength to strength, with both companies actively marketing at shows and participating in conferences in America to promote the Imants and Koro® by Imants range of machines through our North American importer, Aqua-Aid." 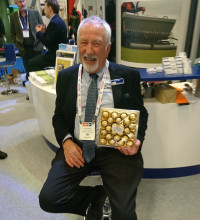 "The most vital ingredient for success is investing in good people. We have a good team of product specialists that I can call on to attend events around the world or visit customers. This provides that vital connection between the turf professional and our staff at our head office in Cheshire, whether in the UK or abroad. David Harrison, for instance, is our man in Asia. He has vast local knowledge and a network of contacts formed over many years. He knows the dealers, the greenkeepers, the groundsmen and the vagaries of the local customs. His experience can meet the challenges centrally and internationally, balancing the needs on the ground and the logistics of providing goods and services thousands of miles from the UK."

"And let's not forget our Ambassador; Ian Pogson, better known as Poggy. He may be past retirement age, but still has that drive and desire to work for me in an industry that we both share a passion for and enjoy being a part of."

As for the future, Richard says that every successful company has a long-term plan. "You invest in developing new markets and work tirelessly to protect your product lines. When competition is as fierce as it is in this industry, you must protect against counterfeit goods and blatant copying. We ensure patents are applied for domestically and rolled out across the world. It is then imperative that you enforce the patent if it is breached, and that you have the determination and resources to do so."

In conclusion, Richard reflects that the company has to be bigger than the individuals in it. "Despite all the potential pitfalls, Campeys has overcome them and learned many a lesson on the way. We have earned a reputation for offering practical advice and superb aftercare service, and deservedly so. Whether through good fortune or good judgement - and I would like to believe it's a healthy combination of both - we export as a new equipment dealer for some of the most respected groundcare machinery manufacturers in our industry, and will continue to do so for many more years to come!"