0 Campey's chosen at Adlington and Burghley 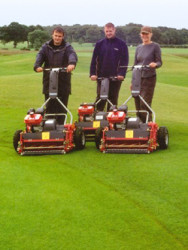 Head Greenkeeper Stephanie Davis selected the LM56GF after having had many other models from several manufacturers demonstrated to her and her team, who care for the Centre's new 9-hole 'graduate' course, along with its existing 9-hole 'academy' course plus a 275-yard driving range.

The 11-bladed LM56GF, which will be used to mow greens and tees, features many enhancements that keep it literally at the cutting edge of mowing technology. With a cutting width of 56cm (22in), the machine's front and rear rollers are now 22mm (approximately 1in) closer together in order to follow contours more accurately. It also has a groomer reel that can rotate in either direction or be raised clear of the sward. The groomer can also be removed and the front roller moved rearwards towards the cutting cylinder, to provide a non-grooming mower.

The LM56GF offers accurate cutting height adjustment without tools between 3mm-13mm (or down to 1.5mm with special Tournament blades), and the cylinder is made from a nickel-chrome-molybdenum compound for extreme strength without brittleness. Power comes from a 4hp Robin EX 13 OHV engine designed for quiet operation, and the transmission incorporates machined gears, with no belts or chains to maintain.

These challenges have now been overcome thanks to a Nunes 360 7-deck rotary mower, supplied by Campey Turf Care Systems Ltd, the specialist distributors of turf and grounds care equipment. Each domed mower deck on the unit contains a 22.5in (56cm) blade and floats independently for an even finish. The machine's overall 11ft 6in (3.5m) mowing width also ensures a high work-rate.

"We used to have a belt-driven mower and were forever having to replace belts," says Philip Herbert, Clerk of the Course at Burghley. "Having blades that are directly driven by dedicated hydraulic motors, the Nunes 360 is much more reliable. We also find that the decks cut the grass very finely with a chopping action, so that the clippings break down very quickly like a mulch. This leaves an aesthetically pleasing finish to the turf."

Popular for use on golf courses and other areas with large expanses of grass to cut, the Nunes 360 has wings that fold up hydraulically for transportation. The staff at Burghley report that this greatly simplifies movement around the course, through gateways, over cattle grids and around other obstacles.