0 Campey's new man in the Northwest

Campey's New Man in the Northwest 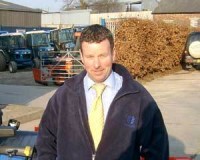 Ian Campbell is ideally qualified for his new post with Campey Turf Care Systems, having extensive knowledge of both playing sport and of designing turf maintenance equipment.

He has been appointed as the Macclesfield-based company's Sales Representative covering Merseyside, north Manchester and Lancashire. Previously, he spent 23 years with the manufacturer Sisis, spending four years in research and development before joining the worldwide demonstration team. Most recently he worked in sales.

Ian, whose home is in Poynton, Cheshire, understands the importance of good sports surfaces. As a schoolboy he had trials with Manchester City and has played in the Mid-Cheshire League.

He plays soccer regularly for a local side and manages an under-9s football team in Poynton. Ian occasionally finds time for a round of golf, and this all-round experience enables him to understand the needs of both players and grounds care professionals.