0 Can a pathogen change its spots?

CAN A PATHOGEN CHANGE IT'S SPOTS?

Looking through the textbooks, dollar spot is an infrequent pathogen only associated with fescue in the UK. We would expect to see it under conditions of low fertility-but always on fescue. Here, at Bingley, we commonly see dollar spot almost every summer-but always on fescue. On occasion, spots similar to dollar spot have been reported on other grass species and have always been dismissed as it only affects fescues! Here lies the false sense of security.

Dollar spot is probably the least understood pathogen that causes major problems in America. It affects all grass species and is the most important disease on golf courses. Until recently it has easily been controlled with numerous fungicide applications (with treatment intervals as little as 7-14 days) throughout the summer period. However, the pathogen is becoming resistant to many of the effective chemicals leading to great concern over how dollar spot will be managed in the future.

Over the past few years we have been seeing increasing numbers of golf courses suffering from a 'pitch mark' type blemish that appears in hot humid weather on annual meadow-grass in Southern England. Trying to establish what was causing these marks has been problematic. By the time the scar had developed and been sent to the laboratory, all that remained active in the sample was Rhizoctonia and Pythium-common saprophytes found in most dead grass. Although the patches looked similar to the dollar spot in the books (perhaps a little more beige and a little less bleached white, Figure 1), many times this was dismissed as (you've guessed it) dollar spot only affects fescues. 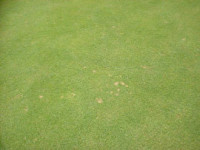 It took a visit last autumn to one of the golf courses with this problem by Dr Joseph Vargas, from Michigan State University, to determine the disease affecting the annual meadow-grass-DOLLAR SPOT!

Since this first positive identification the problem has been noted on bowling greens and other golf courses in the area. It looks like a pitch mark on the annual meadow-grass. The spot does not get any bigger and does not look slimy or 'active' like fusarium patch.

Dollar spot is a difficult disease to work with. It has been classified as Sclerotinia homoeocarpa but it does not form true sclerotia and so cannot be a Sclerotinia. At present it is thought to belong to either the genus Lanzia or Moellerodiscus. The pathogen is thought to survive in infected plants and by resistant structures called stromata that remain in the soil until favourable conditions cause them to grow and infect new plants. The pathogen colonises foliar tissue when the days are hot and humid (15-30°C), the nights are cool and heavy dews form. The past few summers have produced excellent conditions to encourage dollar spot, which may account for the increase in observations of the disease which spreads into a spot 1-5 cm diameter and stops (Figure 2). Spots do not get any bigger (reasons why are unknown) although numerous spots may form and join up to become a large infected area. 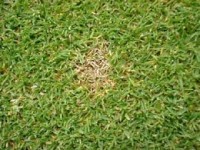 Fig. 2: Close-up of the dollar spot on annual meadow-grass.

The disease is encouraged by low fertility (although it may be that nitrogen encourages the grass to grow back into the infected spot rather than low nitrogen predisposing the plant to attack). There is also speculation that the pathogen does not kill the plant but just the foliage and the grass can grow back from the crown.

From a diagnostic point of view, the pathogen is difficult to identify. The spot often does not yield much mycelium. The mycelium is very similar to Rhizoctonia and, to make matters worse, Rhizoctonia has often colonised the patch as soon as senescence of the grass leaves has occurred as the humid conditions also encourage Rhizoctonia.

Cultural control measures include ensuring adequate fertiliser has been used to encourage healthy grass growth. Irrigation water should be applied in the early morning rather than the evening and dew should be removed as quickly as possible to reduce the amount of time that the surface is wet. Air movement over the turf should also be encouraged to reduce the humidity at the turf surface. However, if the conditions are conducive enough, plant protection products may be required.

Preventative application of fungicides would not, generally, be recommended as part of an integrated pest management programme. However, fungicidal control of dollar spot is best applied when conditions are conducive at the very first sign of disease. American research has shown that waiting until the disease is visible encourages a build up of inoculum in the turf which makes the disease more difficult to control. Some fungicides are not as effective when the disease has become established. The active ingredients that are good for control include chlorothalonil (such as Daconil Turf or Fusonil Turf) and iprodione (such as Chipco Green). Both of these fungicides work well as protectants and should be applied at the very first sign of disease as they may not be as effective on more established disease. Fenarimol (Rimidin), carbendazim (such as Mascot Systemic or Turfclear) and thiophanate-methyl (Mildothane Turf Liquid) also have good control and can be used throughout the season. However, please remember that carbendazim and thiophanate-methyl are from the same chemical group (the methyl benzimidazole carbamates) and so should never be used after each other in a fungicide rotation. American research has shown that azoxystrobin (Heritage) does not have activity against dollar spot.

Dollar spot has the potential to develop resistance to all of our fungicides quickly (as resistance in America has shown). Therefore, in controlling this pathogen we must be pedantic in our use of products. If you can get the disease early enough, you could use a rotation of iprodione, chlorothalonil, carbendazim, fenarimol and thiophanate-methyl. Remember not to use repeated applications of any fungicide from the same chemical group. If our summers are going to keep being more Mediterranean-like, we must keep these fungicides effective against what could be a very damaging disease.

So far, this disease has been observed on fescues in the UK and now on annual meadow-grass in coastal regions of the South of England. However, there have also been some unconfirmed but suspicious spots around Manchester. I would like to build up a picture of this disease and improve the diagnostic techniques that we use to identify it. If you suspect you have dollar spot on your course, please contact me. We can no longer use the old line-it is not dollar spot because it is not on fescue-but, at least up until now, it has not been found on bentgrass!