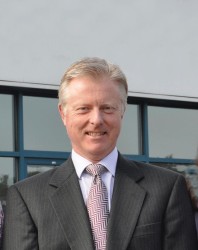 "What 16° actually feels like is even harder to depict. How is the operator supposed to judge what is safe and what is not?"

Mowing slopes safely can present a headache for today's turf maintenance professionals. With the advent of more stringent health and safety legislation, gone are the days of using a hover mower on a rope as an acceptable solution to mowing a steep slope. If nothing else, this method is very labour intensive, quite apart from the potential safety issues.

To understand the issue with more clarity, first let's clarify what a steep slope is. We could say steep is something that is unsafe to walk across but, at best, that's a bit vague and certainly not measurable in a defined way.

Mower manufacturers who design machines to comply with CE self certification will, amongst other standards, be guided by BS EN 836 Garden Equipment - Powered Lawnmowers - Safety. This, perhaps surprisingly, covers all mowers from small domestic machines up to, and including, the largest professional ride-ons. This British Standard provides clear guidelines for the mower manufacturer when designing equipment. 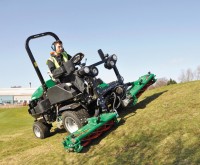 All manufacturers must show the 'Safe Working Angle' on their mowers. To define this, the machine is tipped on a tilt table until at least one wheel loses contact with the ground. At that point, the angle of the slope is measured. Let's say it reaches a tipping angle of 32° before a wheel leaves the ground, then the safe working angle, as declared by the manufacturer, will be 50% of that, which is 16°.

To ensure that this is a true reading, the tipping angle will have been determined with the machine in its least advantageous position, which could be facing down the slope, mower deck or cutting units raised, low on fuel and the operator in the most forward seat position. From this, you can see that a 50% safety margin is built into the standard.

It's worth noting that this standard does not apply to machines designated as tractors; in that case the operator/owner must determine what is safe.

If 16° is the safe working angle of a hypothetical machine, how does the operator know when that angle has been reached or exceeded? In truth it can be very hard to judge, especially when driving at speed and concentrating on mowing grass. Further questions arise. Is 16° steep? What does it look like? And, more importantly, what does it feel like? We can try to show what it looks like with a diagram. 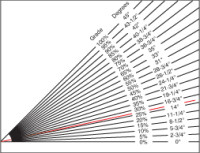 This diagram shows what it looks like, but even that is hard to relate to an actual slope. What 16° actually feels like is even harder to depict. How is the operator supposed to judge what is safe and what is not?

Some rely on experience. However, many local authorities, municipalities and contractors have measured slopes they have to cut and, in some cases, ban operators from mowing such areas with a ride-on, unless the machine is specifically designed for the purpose.

Often, only small areas of a slope are too steep, so how is the operator supposed to know that? Even with all the knowledge available, can it be consistently adhered to? The Health & Safety for England (HSE) advises that "as far as reasonably possible" operators of machinery should mitigate against risk.

A simple ball gauge in a tube or dish can give an approximate indication of machine angle. It is only informative, not proactive. This is where technology can now help, but the primary prerequisite is that the machine in question must be electronically controlled, i.e. the interaction between the operator, safety systems and machine need to be communicating via some sort of digital controller.

We recognised the importance of this issue some time ago and made our patented Tilt Sensor Technology system, (TST™) available in 2009 as an option when we launched the Highway 3 municipal triple cylinder mowers. This unique technology has now been rolled out on the new Ransomes Parkway 3 triple and the HR300 rotary mower. 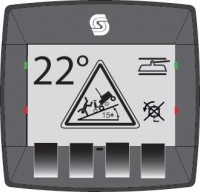 TST is, currently, the only proactive safety device of its kind on the market. For example, when fitted to the Ransomes Highway 3, with a safe working angle of 16°, the system operates as follows.

All these machines have a dash mounted LCD screen, which, under normal operating conditions, displays fuel and temperature levels plus mower drive and park brake status. However, during operation, if the machine is driven on a slope of 16° the machine displays a warning - a 16° symbol appears on the screen, overriding all other information. This will continue to display the actual angle as it increases, in real time, until the machine angle drops below 14°, when it will revert to the standard screen display.

However, if the slope reaches 18°, the screen will display an 18° warning and a symbol indicating that the mower lift system has been inhibited. The cutting units will be prevented from lifting to aid stability, an audible warning sounds every four seconds and red LED lights flash in the screen. This continues until the machine is driven to an area of less than 14°.

Finally, if the operator continues to ignore the warnings and the slope reaches 22°, the screen will display a 22° warning symbol and the mowers will disengage. The audible warning becomes continuous and then, depending on the orientation of the machine on the slope, one or more of the three mower units may be lifted automatically to re-establish better stability until the machine is driven out of danger.

This provides a clear indication to the operator that he/she is in a dangerous area and, with the mowers disabled, there's no advantage in attempting to continue working.

On the Parkway 3, there are slight differences due to the wider footprint of the machine as its safe working angle is increased to 18°.

The Ransomes HR300 is almost unique in that it is one of very few out-front rotary mowers with a fully digitalised control system. When the optional slope kit it fitted, which consists of wide wheels, counterbalance weights and the TST system, the HR300 reacts slightly differently than a cylinder mower.

The start-up screen will show a safe working angle of 19° before any intervention from TST. At 16°, a visual warning appears in the screen. At 22°, an audible warning sounds and the deck lift is inhibited. At 26°, the audible warning continues, the lift is inhibited and the mower disengages. The machine should then safely be driven out of danger. Unlike the cylinder mowers, the system does not use the mower deck as a counterbalance.

Ride-on rotary mowers represent the largest market sector in Europe, if not the world. To introduce this technology into such a price sensitive market has stimulated much discussion, but has proven successful. Managers can now demonstrate that they have taken mitigating steps, as demanded by the HSE, to 'as far as reasonably possible' prevent roll-over of their machinery.

Operators are clearly better protected, and are being offered a safer working environment. In addition, the machine's electronic controller records all the events and stores them in its memory. Our conclusion is that this type of technology appeals on all levels. 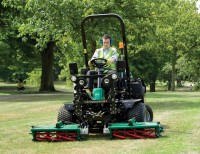 Operations Supervisor, commented, "There's a nationwide issue for local authorities when it comes to mowing banks, and this system takes away the guesswork. You know exactly the inclination of the slope you're mowing because it tells you on the screen. Some operators will take risks because they may have previously cut certain banks with different machines, but this provides a uniform system for all of our operators."

"Like many councils, we've experienced some serious cutbacks; we previously operated 16 machines of various types, but have reduced this to just eight with this new fleet. These will be doing as many road miles as mowing miles, so it was important that we sourced robust and safe equipment that provided a comfortable and secure working environment for the operators. This tilt system is an excellent addition to help mitigate risk and provide a safe working platform for our staff."

Finally, for more specialist slope mowing problems, even more sophisticated technology can be used in the shape of a radio controlled mower. Adhering to operating guidance, using such a machine, reduces the risk to the operator still further, and is especially appropriate for slopes in excess of 30°.

The operator is not sitting on the machine, or even touching it, which also eliminates any hand arm vibration concerns that can be an issue with hand held products such as brushcutters. The Ransomes Spider series is somewhat unique in this sector, as the drive wheels steer the machine without turning the main chassis. This technique has the advantage of not altering the machine's centre of gravity when turning, which aids stability. 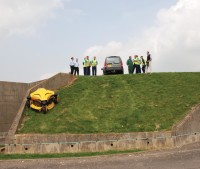 Initially, we believed that the Spider would be good in applications such as motorway slopes and riverbanks, but it's become a niche mower in various other applications. Golf clubs with seriously undulating terrain are using it more and more to maintain steep fairways and areas of rough. It is also being used on MOD contracts to mow around munitions bunkers, where operators would be in potential danger, and in petro-chemical plants to maintain non-sloping areas deemed hazardous to staff.

Cannon Horticulture are specialists in multi-site grounds maintenance with MOD contracts at RAF bases across Lincolnshire. The steep sides of munitions and fuel storage bunkers have, traditionally, been a problem due to the health and safety aspects of operators standing awkwardly on steep banks and using strimmers to mow the grass.

Marc Pykett, Cannon's Operations Manager said, "The prime reasons for purchasing the Spider were health and safety, HAV and noise issues relating to our operators. Strimming these steep banks is a major H&S issue; it's relatively dangerous, labour intensive and time consuming, but the Spider alleviates all of these issues at a stroke. The quality of cut is very good and, with four-wheel drive and four-wheel steering, traction is excellent and turf damage minimal."

In a different application, a Spider mower is maintaining the ocean side slopes on the fairways at Old Head Golf Links, the golf resort situated on the Old Head of Kinsale peninsular in the south west of Ireland.

Neil Deasy, the course superintendent at Old Head, says there were three main reasons why the club chose the Spider for this application. "Productivity, playability and health and safety were the prime drivers behind the purchase of the Spider," he said. "The 2nd fairway is a typical example of what we have to contend with in terms of slopes. The semi-rough areas to the sides of the fairway are 40 degrees plus in some places, with rescue areas below for wayward drives. This sloping semi-rough used to take two of the team a day and a half to trim with strimmers; with the Spider it takes just 1½ hours!"

Without a doubt, mowing steep slopes in today's health and safety conscious environment has driven both employers and mower manufacturers to use technology to find solutions. Although a challenge, it's something that we, and other manufacturers, are tackling head on. Come to think of it, it's something we've been doing collectively, since the mower was invented.