by Dave Saltman
in Pitchcare News, Public Places, and Synthetics
on 28 Apr 2015

2 Can you help save your local community pitches? 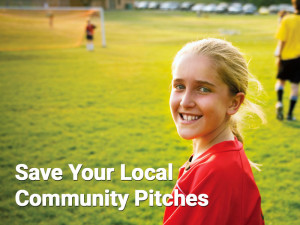 If you value green open spaces or play sport on local natural grass facilities, then please read on and find out how you can help Challenge the FA's decision to create Centres of Excellence using synthetic surfaces.

To instigate a sensible debate and considered dialogue between the sports turf industry, the Football Association and Government on behalf of the users of grassroots natural football pitches. A course of action that an organisation such as the FA should participate in, before it publicly commits to spending literally hundreds of millions of pounds on synthetic surfaces. In reality, synthetic surfaces only ever attempt to emulate correctly maintained real grass pitches.

Don't settle for less, let us invest in the real deal. If you want to make your voice and the voice of like-minded people heard loud and clear, then pledge your support for the natural, healthy, cost effective, traditional and community focused alternative.

Why has this petition been launched?

A passion for natural grass is something we all share, whether from our own sporting experiences or the professional work we undertake on a daily basis.

Following years of underinvestment in basic maintenance of natural grass pitches - which play host to our nation's grassroots football in communities across the country every week, they are at risk of being lost in favour of shared synthetic surfaces.

As part of the FA Chairman's England Commission, Report 2, October 2014, Greg Dyke (FA Chairman) has asked for £230m to be funnelled into installing 283 synthetic surfaces designed to operate as centralised football hubs in England's major core cities, Greater London and then the next 20 largest Local Authorities.

The primary justification for this is largely due to the poor condition of some of the UK's open spaces and how these dilapidated facilities turn people away from the sport.

We agree that natural grass pitches are in poor condition, but we disagree that centralised hubs are the cost effective or broadly accessible solution to solve this problem.

We disagree that grass pitches cannot provide a quality playing surface. Current maintenance regimes are virtually non-existent, but more regular mowing, aeration and compaction relief, weed killing and general weekly care, would make a vast difference to the quality of natural grass pitches. Proper maintenance would consign the current image of mud baths and matches being cancelled to history. What's more, all of the money for this would come from the proposed £230m investment.

We disagree that centralised hubs are the cost effective or broadly accessible solution to solve this problem.

We believe the numbers show it makes much more economic sense to retain the existing natural grass pitches and ring fence money into them so the existing teams of dedicated professionals can manage them at a much higher standard than ever before. 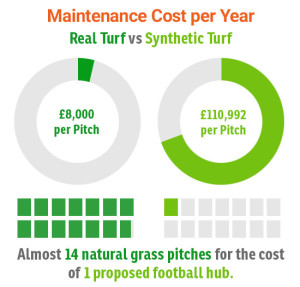 Over the 10 year life time of a synthetic surface carpet within one of the proposed centralised hubs, the culmination of the expensive capital installation costs, ongoing maintenance and vast re-carpeting fees, means that they end up costing a staggering £110,992 per year.

Compare this to the cost of maintaining one natural grass pitch at £8,000 per year.

This means you could maintain almost 14 natural grass pitches for the cost of one proposed football hub. Extrapolate this to take into account all 283 planned synthetic surfaces then;

For the same overall cost of 283 football hubs with synthetic surfaces, you could maintain 3962 natural grass pitches per year.

We believe the FA have a responsibility to serve football at all levels, whether it be fostering young English talent or improving the condition of facilities for the tens of thousands of Sunday league and casual players who rely on their local natural grass pitches each and every week in every city, town and village across the country.

We believe, if the FA's plans to install these hub facilities goes ahead, that will be the thin end of the wedge. Local natural grass pitches which are already being hit in terms of maintenance will further decline until they are inevitably sold off by the local authorities for development.

Young people will become accustomed to playing on synthetic surfaces which will then creep into the professional game at all levels.

If you would like to understand more about this issue please visit here.