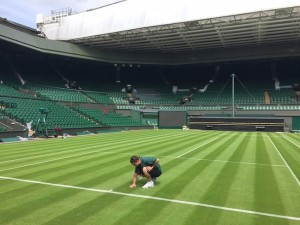 It's not every day superstar athletes and A-list celebrities stroll around your workplace to admire your labour ... but during the week before Wimbledon, it's pretty common for Stony Plain native Grant Cantin.

The 41-year-old serves as the deputy head groundsman at the All England Lawn Tennis and Croquet Club, the home of the most prestigious tennis tournament in the world.

"There's always a great buzz the week before the tournament," Cantin said from his office in London, U.K. "Everyone comes by to chat and give their feedback on the grass."

On this particular morning, exactly one week before the first serve, it was two-time major tennis champion Andy Murray and his Hollywood pal Kevin Spacey. Cantin seeks feedback from all of the game's brightest stars; the day before it was from defending champion Novak Djokovic, and later in the week, it will be from living legend Roger Federer.

"They said the court was beautiful, a bit soft, but it has to be," Cantin reckoned. "Each day court gets a bit firmer, it will dry out every day."

"The most important piece of grass in the world"

Cantin knows a thing or two about the playing surface. He's worked early mornings, late nights and weekends over the past eight months to make sure the courts are perfect for Round 1 beginning on June 27 and remain playable until the men's final on July 10.

It's a process he's repeated for the past 15 years on the grounds crew at the All England Club.

Wimbledon is the only Grand Slam tennis tournaments still played on grass courts. It's also the oldest tournament in the world, with a broadcast reach of more than one billion people. A victory at Wimbledon changes an athlete's life, and cements their legacy in tennis lore.

Cantin's leads a staff of nearly 30 to ensure the 41 grass courts at the 45-acre club can handle the 13-day tournament and the rest of the playing season.

"This is Wimbledon, they have to be perfect," he said. "In my eyes, this is the most important piece of grass in the world. It's been there long before me, and it will be long after I'm dead."

Cantin's task is made nearly impossible due to unpredictable weather and the constant trampling of running shoes and tennis balls. In fact, centre court at Wimbledon takes more punishment in two weeks than a soccer or football pitch does during an entire season.

"It's a lot of pressure, but we have to get it right," Cantin said. "We strive for all courts to be identical and for people to say 'this can't be real, it looks like a carpet.' "

Grass courts typically cause the tennis ball to bounce low and sporadically while maintaining its speed. Thus, speed and power players are best suited for the surface, as are strong servers since reaching the ball is more difficult on grass than it is on clay or hard courts.

It makes for great tennis, but the effort to maintain the courts is not your typical Monday to Friday job, even during the off-season.

"Grass doesn't know what day it is," Cantin laughed. "It doesn't stop growing on the weekend. It's a living, breathing surface that has a life of its own."

Read the full article from the Stony Plain Reporter HERE