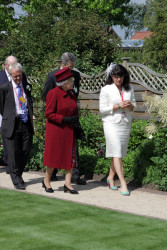 The impressive landscape setting has been created as a signature garden which describes the story of Capel Manor in both its history and how horticulture can be used in an imaginative way.

HM The Queen also visited the Queen Mother Centenary Garden which had recently been returfed with Rolawn Minster Pro turf.

Cedric McMillan, Rolawn's Sales & Marketing Director commented "Rolawn were delighted to assist with this spectacular project. Due to the large expanses to be turfed, students used a combination of 1m2 and 13m2 large format rolls."