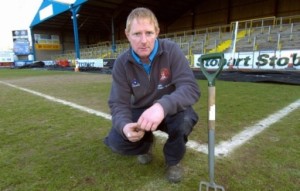 Carlisle United boss Greg Abbott has hailed Dave Mitchell as a miracle worker after the groundsman produced a pitch he rates the best he has ever seen.

Abbott says the new Brunton Park surface, which will be used for the first time when Championship side Burnley visit on Saturday, is better than Wembley.

The United manager wants his players to take full advantage of the pristine pitch when the Clarets come to Carlisle.

"It is in unbelievable condition again," he said.

"How Dave Mitchell does it is remarkable. It's as good a pitch as I've ever seen.

"It's better than Wembley when we played there - it's sensational.

Read the full story by following the link below: