Good aeration can help turf to cope with factors such as changing weather conditions and mechanical wear from play and machinery operations. Its use has become standard on fine turf, but finding a suitable solution for larger turf areas such as fairways and sports pitches can be a challenge, soaking up horsepower and adding to costs.

Campey Turfcare has extended the range of aeration options with the Carrier Turf, which has undergone extensive evaluation by the company on all types of sports surface, giving great results on large areas.

Using 34 aerating discs, with seven blades on each, the turf is penetrated at an optimal angle to shear the root zone and subsoil area while having a minimal effect on the surface. Blade pressure of 100kg per disc, brought into action via a weight transfer system, ensures good penetration even in the hardest conditions.

Working depth is from 10 to 19cm, cutting through the thatch layer and creating air channels down to the root system. Gas exchange for the roots is improved and water can infiltrate down to the drainage layer.

Breakdown of organic material and the release of residues from previous fertiliser applications held in the thatch layer has been shown to provide sufficient nutrients to allow subsequent applications to be reduced, cutting input costs.

But the Carrier Turf does more than just slit. The aerating discs are preceded by two rows of independently mounted brushes which brush in top dressings and stand the sward up. A third brush takes remaining dressings into the slits and a large diameter steel roller produces a level finish, giving a rapid return to play.

Modular design of the Carrier Turf's frame allows individual elements to be exchanged so that the implement can be used for a range of operations, including as a stand-alone roller. Robust build from a manufacturer also associated with tough agricultural machinery means that it ideally suited to contract work or the demands of local authority schedules. 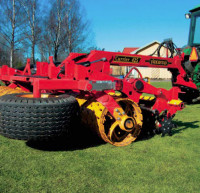 Working widths are 1.75m and 4.25m, with the largest model giving the capacity to aerate the fairways on an 18-hole golf course in a day, or treat a football pitch in a matter of minutes. Rubber suspension for each pair of discs allows high forward speeds without compromising quality and minimises the risk of damage to the discs from stones or other foreign bodies.

The 1.75m model is linkage mounted and has power requirements of around 45hp, while the 4.25m unit is trailed and needs 80hp plus. A unique automatic folding system is operated and locked for safety from the cab on the towed Carrier Turf, minimising downtime and giving a transport width of 2.5m.

Richard Campey comments: "The Carrier Turf is an ideal solution for groundsmen and greenkeepers looking to aerate large areas cost effectively. It provides thorough penetration of the thatch layer to improve growing conditions and help get the best from turf."