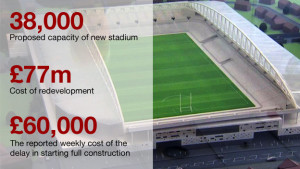 Planning permission for the 38,000-seater stadium was granted by Mark H Durkan in December 2013. Local residents who objected to the size of the planned development launched a legal challenge in response. Mr Justice Horner held that the decision-making process was "fundamentally flawed".

He identified failures in the environmental impact assessment of the increased facilities and an unrealistic reliance by the Department of the Environment (DoE) on an existing 32,600 capacity as a baseline for the project.

With far fewer spectators normally attending matches at the current ground, the judge also found that the effect of bigger crowds on the surrounding roads network had not been properly examined.

The judge also pointed to the minister never being told of police concerns about safety issues around having 38,000 people attending an event.

While he did not rule on whether the failure to inform Mr Durkan of these concerns was deliberate or accidental, he concluded that it had denied him the opportunity to consider all relevant evidence.

However, he did not quash the minister's decision.

Instead, lawyers for the DoE, the GAA and a residents group who mounted the legal challenge are to make further submissions on appropriate remedies.

Mr Durkan said he remained hopeful that "there might be a positive outcome to this".

Asked for his reaction to the judge's statement that his decision-making had been "fundamentally flawed", Mr Durkan said: "I made what I said at the time was the right decision. I still stand by the decision I made on sound planning grounds. However, the judge has decided that is not the case."

He added: "I'm hopeful that when parties reconvene on Wednesday that common sense will prevail. This is a disappointing day, not just for me and my department, but also for the GAA."

What happens to the £61m of government funding promised for the project? The Planning Service previously indicated that if the funds were not spent in time, a clause in the contract would prevent them becoming available again. During the hearing, the court was told that the money would be returned to the Stormont Executive for spending elsewhere. However, Sports Minister Carál Ní Chuilín said after Monday's judgement that she hoped that money would remain available

What is the possible economic impact? In the short term, construction and planning jobs are at risk in addition to the economic spin-offs that the project would have generated

What effect will this have on Antrim GAA? The county is now left without its main ground, with work to dismantle the existing old stadium having already been completed