The Premiership is all about 'big bucks' these days, with money pouring into clubs from all over the globe. Only fifteen years ago the 'big three' were Manchester United, Liverpool and Arsenal and money was 'traditionally' made through sponsorship, sensible (ish) transfer fees, ticket receipts and commercial revenue. For a short while Newcastle and Blackburn challenged their superiority, but they quickly faded away as the mega-bucks started to roll in at other clubs.

Chelsea started the ball rolling with Russian money building a strong player base to (successfuly) challenge for honours and they are now firmly established as one of the 'big four'. Arsenal benefitted from Middle East money in the shape of a brand new stadium and a 'few quid' to spend on players, whilst Manchester United and Liverpool have both had new American owners in recent years with not inconsiderable financial clout. But all that is about to change if, indeed, money talks!

The latest club aiming to spend their way to success are Manchester City. In September 2008 the Abu Dhabi United Group bought the club and began a series of expensive player purchases. Their first coup was to steal Brazilian Robinho from under the noses of Chelsea for a staggering £32 million. As if to rub salt into the Stamford Bridge wound Wayne Bridge and Shaun Wright-Phillips were bought from the club.

To date Manchester City has invested over £200 million on players. It remains to be seen whether this investment brings success. Certainly, last season will have been a disappointment to their long suffering fans with the club finishing 10th in the league and 'trophyless' in all other competitions.

So, with an annual wages bill that is set to beat all records - reported to be in excess of £200 million - is any of this new money being spent on the playing surfaces? 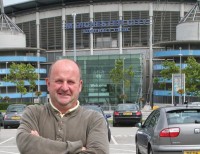 Manchester City currently have two out grounds, the academy ground at Platt Lane and the training ground at Carrington (with Manchester United as neighbours!). Both are in constant use seven days a week.

Overall management of these facilities, along with the City of Manchester stadium, is the responsibility of Roy Rigby who has been at the club since 2001. Roy previously worked at Blackburn Rovers before being offered the position of Head Groundsman at Manchester City.

Since his arrival Roy has endeavoured to produce the best playing surfaces he could with the resources he had at his disposal. When he started he had a team of just six to manage all three sites, however, with the ongoing development of the facilities and the upgrading of pitches Roy now has twelve staff to cope with the amount of work required to maintain them.

The last twelve months has seen unprecedented levels of funding with £2.5 million being allocated to the upkeep of the playing surfaces - £600,000 at the Carrington Training Ground, £700,000 at the stadium and £1.2 million at Platt Lane. Roy still cannot believe his luck. Everything he has asked for has been sanctioned.

It has been a bit of a rollercoaster ride for all the staff, with new working practices, new machinery and complete refurbishments of all playing surfaces.

To help cope with the increased workload Roy has restructured the staffing. He is now Grounds Manager whilst a head groundsman has been appointed at each of the three sites.

The longest serving member of the team is Paul Watson who has been at the club for thirty-five years and the newest recruit is Lee Metcalf who recently moved from Blackburn Rovers.

It was certainly a busy closed season for them. Roy's first task was to confirm the club's requirements for this season with regard to pitch improvements, draw up specifications and put the work out to tender. Mallinsons were the preferred choice.

This site is predominantly set up for the first team and reserves along with weekly academy matches. The site consists of three distinct areas, with a total of six full size pitches and a large training area.

Area 3: (23,000 square metres). Two full size academy pitches and training areas. This area received a full new pitch reconstruction. The old turf was koreod off, removed from site and primary drainage installed. Lower and upper rootzones were laid down with an application of Terracottem soil conditioner to help retain moisture and nutrients. Slit drainage was installed at 750mm centres with 25mm depth of new fibresand ameliorated into the top 100mm. Reseeded and fertilised.

All goalkeeping areas were modified, incorporating rubber crumb infill materials down to a depth of 200mm.

All areas were seeded with Bar 7 at 40gm2 and a 12:6:6 granular fertiliser was applied to aid initial growth.

A Rainbird fully automated pop up watering system, incorporating 200 heads, was installed on all pitch areas.

The maintenance of the pitches revolves around the needs of the players and coaches to help reduce wear. Roy operates a five day rotation of pitches.

With sand based pitches prone to leaching nutrients an intensive programme of feeding is ongoing, using a combination of granular/foliar feeds, often every 2-3 weeks throughout the growing season.

Grass is maintained at a height of between 25-28mm mowing on a daily basis using a combination of ride on and pedestrian cylinder mowers. All pitches have to be ready and marked by 9.30am

Marking out of all the pitches and training grids is done using a Kombi Beamrider laser guided spray jet marking system. This saves a lot of time, reducing the need to string out pitches. They also use Fleet Magipaint to help reduce the impact of lines allowing them to be cleaned off easily.

Wetting agents and growth retardants are used as and when required. PrimoMaxx has been used on some of the pitches to help slow down growth whilst, at the same time, increase rootmass and sward density.

A new electric Toro Workman and Toro triple mower have recently been purchased. Portable goals and training aids are upgraded as and when required.

The academy was set up in 1998 to provide a strong and effective youth programme for the recruitment and development of young footballers.

Since then, twenty-seven players have emerged to play first-team football for Manchester City, an exceptional achievement in the modern era.

In line with the Football Association's Charter of Quality, the academy prepares players of the future and enables them to progress both on and off the field.

Structured coaching, together with an educational and welfare programme throughout their time at the club, ensures that there is continuity for the players from the ages of 9-18.

Platt Lane is a very busy site with the two grass, soil based pitches hosting the majority of matches. Roy was keen to invest in upgrading them from soil-based to Fibrerootzone and a reinforced Desso pitches to help cope with the heavy use. Both pitches would also have a fully automated watering system installed.

Work began at Platt Lane on the 9th May with Mallinsons reconstructing both grass pitches, installing one Desso pitch and sand ameliorating and incorporating fibresand elements into the other.

Desso Pitch - pitch was koroed with all vegetation and 200mm of existing soil removed from site. Sub-base and rootzones were installed using laser-grading machinery to ensure materials were laid at precise depths, beginning with a gravel drainage layer, lower rootzone (150mm) and upper rootzone (100mm). A Terracottem soil conditioner was incorporated to a depth of 200mm before finally sowing with Bar 7 and fertilising.

Once the seed had germinated Ged, Alan and Lee began regular mowing and watering to ensure good grass cover before the Desso fibres were sown in.

It takes about seventeen hours to complete one single, one metre wide run the length of the pitch run. Two machines were used in tandem, which took close to four weeks to complete a full size pitch. The fibres are sown to a depth of 200mm. In total they represent 3-4% of the total grass cover.

Roy is confident the Desso pitch will facilitate over sixty games a year. And, even if the pitch loses grass cover, it will continue to be stable, perform well and look good.

The other pitch was koroed off, cultivated, laser graded and ameliorated with 25mm of concentrated fibre material, working the material into the top 100mm of upper rootzone and finally oversown with Bar 7. Roy has also invested in two new Allett Buffalo mowers for maintaining the pitches.

Once these pitches are up and running they will again follow the same maintenance regimes, cutting on a daily basis with feeding tailored to meet the needs of the grass plant.

The City of Manchester Stadium

The stadium is very impressive with the Desso Grassmaster pitch looking exceptional. Not having a concert this year has helped enormously with pre-season preparation, allowing more time for the grass to establish.

Renovation of the pitch has been different to previous years; it was cleaned off with a spiral rake, topdressed with 80 tonnes of sand, vertidrained, fertilised and reseeded. This year money has been spent on acquiring more equipment and installing a synthetic deep pile rubber infill grass carpet around three sides of the pitch. Over 1,400 square metres was laid to provide warm up areas, linesman's runs to reduce mowing times and provide a safe turning area for the mowers.

Five additional lighting rigs have been purchased along with a Kioti DK551C tractor to pull them off an on the pitch. Four new Allett Buffalo mowers have been acquired along with six Lawnflite pedestrian rotaries for cleaning up the pitch. A Toro Procore aerator, Toro Soil Reliever, Blec 2 metre seeder, two Dennis cassette mowers and a 300 litre boom sprayer have also been added to the impressive list of machinery.

A varied programme of aeration is now possible with the combination of the Procore and the Soil Reliever which are used on a weekly basis to keep the pitch open, free draining and reduce the build up of black layer.

The pitch is mown at 25mm using the Allett Buffalo mowers, with the staff now preferring the lighter weight Buffaloes for mowing, and using the Dennis' for verticutting and brushing.

Natural grass practise goalkeeping areas have been retained within the artificial grass area with the aim of stopping keepers from using the main goal areas. A full size portable goal can be positioned to one side of the pitch with the frames being firmly secured by neat locking chains that fit in the new artificial surface.

Lee Jackson and his staff also look after the Manchester Arena athletics stadium adjacent to the main stadium, keeping the grass surface in good condition for both football and athletics.

So, as money continues to be 'no object' at Manchester City, some may say it will be much easier for all concerned to achieve the highest levels. In truth, it will probably put more pressure on both the team and the groundstaff as people's expectations rise.

Roy and his team are very committed and you can see this in the standard of presentation at all three sites.

It is certainly a far cry from my time at Fratton Park in the early eighties when the first team were 'shipped' off to two naval pitches to train whilst I maintained the stadium pitch (with just one assistant!).

Hopefully, the investment at Manchester City and, indeed, many other Premiership clubs, will make the groundsmen's jobs more rewarding and fulfilling.