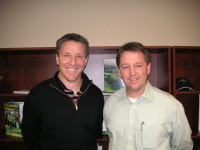 Kevin and Michael Cavanaugh are the new heads of Floratine Products Group having taken over as President and Vice President in October last year.

Kevin Cavanaugh whose title embraces the role of Chief Executive Officer brings over 15 years experience in turf management, agronomy and golf course renovation to the post having trained, initially in golf course management at Augusta National in Georgia. He went on to become Course Manager at Miami Beach in Florida before becoming involved in the building and re-construction of a major golf facility at Key Largo. It was while managing another golf course, at Ponte-Vedra Beach, that he

developed a growing interest in agronomy, which lead to a post as Corporate Agronomist within Floratine. He rose to become Vice President in 2006.

Michael Cavanaugh will serve as Vice President and Chief Operating Officer. Having gained business degrees at both Penn State and New York Universities, Michael joined the corporate world following eight years as a U.S. Marine pilot. Before joining Floratine he was Executive Director of Sales and Marketing with OraPharma a member of the Johnson and Johnson healthcare group.

Both brothers share an abiding interest in golf, gained from their Mother and Grandfather. "We moved around a lot during our childhood but wherever we went, the one thing we could be sure of was that there would be a golf course," Michael explains. "We're looking forward to working together and with our outstanding international distributor team, to further develop Floratine's worldwide interests." The future could see many Golf Course Superintendents joining the corporation. "I have a belief that Golf Course Superintendents should assist Golf Course Superintendents," says Kevin. "I want to continually bring them into the business world."
For further information on Floratine Products Group visit the website at: www.floratine.com