When a golf club can count leading golf course architect, Jonathan Gaunt, amongst its members, they have high quality advice on tap. So, when the Cavendish Golf Club began its course improvement programme ahead of its centenary year in 2025, Jonathan was on hand to offer advice ... and our editor was on hand to record how the work was coming along, with the assistance of a loaned JCB excavator and an experienced golf course shaper

The Cavendish Golf Club in Buxton, Derbyshire, is a private members club with a current membership of around 400. The course, set in the beautiful Peak District, was designed for the 9th Duke of Devonshire on his Buxton Estate by the renowned Dr Alister MacKenzie in 1923 and opened in 1925. It was sold to the members in 1953 following the death of the 10th Duke. 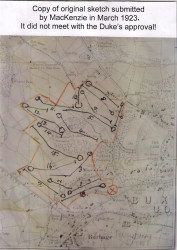 Cavendish was one of Alister MacKenzie's last UK commissions before he gained overseas contracts in Australasia, South America and the USA. In the early 1930s, Alister made his home in the USA where he stayed until his death in 1936. Two of the gang who worked on Cavendish also emigrated and worked for him at Cypress Point in California. It was after playing the latter course, and meeting Alister, that Bobby Jones and Clifford Roberts invited him to design Augusta National, the home of the Masters.

By modern standards, the course is short at 5,721 yards; the golfer's shot-making skills, not his power, providing the challenge that keeps players returning time and time again.

Whilst it is not long, it is widely recognised that the undulating greens are the true test. MacKenzie's design (except for minor changes to some greens in the 1930s and the 9th green, which was redesigned by Gaunt & Marnoch Ltd in 1999) has not been altered since the building of the course; they are pretty accurate examples of his work. You really have to think about where to position your ball on the fairways to be able to get close to any flag and, once on the greens, there are so many subtle borrows and breaks that nothing can be taken for granted! Anything above nine on the stimpmeter and they really do become extremely tricky! 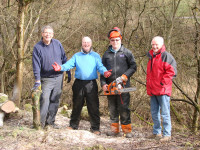 Like many golf courses, the last few years of economic downturn has tested their resolve in managing resources and, above all, remaining solvent. The club has never had a large greenkeeping team; in recent years, it has been down to three, with a lot of support from members who volunteer their services and help out on a Tuesday rota system.

So, like many other clubs, Cavendish has had to cut its cloth accordingly for a number of years, running on a skeleton greenkeeping team which currently stands at two full-time permanent staff members and one/two casuals brought in for the summer. This has meant that the club has only been able to focus on undertaking regular maintenance regimes, with little or no time to take on any larger winter projects. This was also compounded by the fact that the club did not have large financial reserves for any major reconstruction works. Over time, this has led to areas of the course becoming overgrown and in need of refurbishment work. 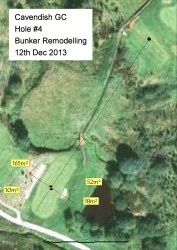 The club are very fortunate to have on the Greens Committee, Jonathan Gaunt, local golf architect (Gaunt Golf Design) and Senior Member of the European Institute of Golf Course Architects, who has been a playing member of the club for several years. Jonathan, in his professional capacity, is able to support and provide advice on golf course design related matters, especially based on his wide experience of working on other Alister MacKenzie-designed courses.

The club's Board of Directors, in October 2013, appointed a Greens Committee which meets regularly with the greenkeeping staff to discuss the maintenance and upkeep of the course. With the club celebrating its centenary in 2025, the board and greens committee are mindful that the members would like to undertake some much needed course improvements to enhance it for this significant event.

The club are keen to retain their MacKenzie heritage but, at the same time, take the opportunity to improve the aesthetics and playing challenges, bringing the course, in playability terms, into the 21st century.

So, after several meetings and detailed site inspections - which, of course, has involved playing the course - a new redevelopment strategy has been drawn up, in the form of a detailed masterplan to improve most parts of the course.

The improvements, as shown on the presentation plan, will be in the form of clearing areas of shrub and undergrowth to improve sight lines, the redesign/remodelling of all course bunkers and grassy hollows, improvements to greens surrounds, new tee complexes, clearing of water features and extensive drainage work.

The club are keen to retain and enhance the MacKenzie layout that used the contours of the terrain to great effect, the small, undulating greens (a MacKenzie favourite), the sloping fairways and the imaginative positioning of tees. Throw in bunkers, out of bounds, rough close to greens and the unpredictable Derbyshire weather, and it is little wonder the course is such a challenge.

A prime example is the 4th hole, a par-3 of 122 yards. The green nestles in a gorge, surrounded by bunkers and water. It is approached from an elevated tee where the wind, they say, seldom drops below force 5. Good golfers would be tempted to take a wedge or a 9 iron - which would often be the wrong choice. It is a card wrecker of a hole!

However, this hole is one of the earmarked refurbishments and the first of many planned improvements - in effect, Phase 1 of the Centenary Course Development Programme. Jonathan, along with the rest of the Greens Committee and Board of Directors were enthusiastic to get things started and, after a number of meetings and finding a sponsor, he was able to agree and start work on this hole.

In fact, it may have been initiated by a discussion I had with Simon Morley of JCB who was keen to look at ways of promoting the JCB brand into the golf market. It appears that, after some fruitful meetings with Jonathan, the club have managed to secure a unique deal whereby JCB have donated the use of a small excavator and dumper truck, and also secured the services of an experienced shaper - Jason Kelly from Greasley's, Golf Course Contractors - to aid the club in remodelling the hole. Some further shaping work (using the JCB excavator) has also been done on hole 4 by local Buxton landscaper, Andrew Hodgson, whose father worked on the course and whose grandfather was involved in the building of the original golf course in 1924.

After some years of neglect, the pond to the left of the green had become overgrown. Dense scrub and overgrown willows were obscuring the views of the hole from the tee, and the bunker to the right side of the green, set into a steep embankment, was in desperate need of reshaping and draining.

I was invited along to see this work being undertaken and find out more about the club's vision for the future. On my arrival, I was greeted by the club's Greens Chairman, Peter Freeman (a graduate of the European Institute of Golf Course Architects) and other members of the Greens Committee and Board of Directors, including Jonathan, who were all keen for me to what was being done to the hole.

Supporting the work was a JCB 8018 mini excavator; a 1.5T machine supplied for the week from the company's manufacturing facility in Cheadle, Staffordshire. Operated by expert shaper, Jason, the overall plan was to use the excavator to dig and shape a new bunker and grassy hollow placement, reset some levels on the surrounds around the green, install additional drainage and excavate a new pathway. Fitted with a tilting bucket, the 8018 did very little damage to the course due to its weight, but was powerful enough to hit the productivity levels needed to get the job done in time.

Jonathan explained the importance of the hole in design terms and why they wanted to make it a signature hole. It will provide, together with the newly designed and constructed bunker on the left side of the green (built in-house only a few weeks before), one of the most challenging and spectacular holes on the course. It was, therefore, essential to open up the views again and clean out the pond to give the hole a sense of scale and perspective.

Most of the scrub clearance had been done previously by the club's volunteer team of more than twenty regular members, headed up by John Robinson - a turfing specialist in his own right who has dedicated hundreds of hours of his own time to the club and greenkeeping team. The volunteer team had also helped to build the new bunker, with Paul Hayward on the excavator and using turf supplied by Tillers - also being used on the new right-hand bunker. The pond surrounds had also been cleaned out, exposing more surface area of the water feature. What remained to complete was some reshaping of the banks, the construction of a new bunker hazard, pathway and improving the drainage around the green.

Like Cavendish, it is clear that many 18 - 36 hole courses, with an eye on increasing revenue, need to think about the possibility of changing or enhancing the layout of their courses if they want to increase interest and attract new players. Additionally, every greenkeeper recognises how critical good drainage is on a busy golf course, especially in light of the changes in climate patterns and the desire of golfers to play 365 days a year. With a finite number of contractors and available machines to hire, ownership really is an option worth further consideration. Owning a machine can help a club become self-reliant, when it comes to project work and maintenance.

As I discovered, the range of compact excavators available from JCB is vast, from micro excavators that are under a tonne to more familiar 8 tonne and 13 tonne models. With a range of bucket options, and other attachments such as augers and even water pumps, the machines serve many purposes. It is this variety of choice that leads me to recommend dealing with an experienced manufacturer who is able to support with site surveys to ensure the right machine for the job is purchased.

As for other course improvements at Cavendish, the club is keen to continue along this route and carry out other work to improve the aesthetics and strategic playing characteristics of a number of holes on the course. In some cases, it will be about redefining fairways, improving the second shots to the greens and making the most of the stunning views seen around the course.

As for the day to day maintenance, this is expertly overseen by the two resident greenkeepers, Nick O'Meara and Mark Elliot, who do an amazing job keeping the course in play all year round to a very high standard. Cavendish, due to Buxton's unique climate, has a very short growing season. Temperatures, generally, only become warm enough to support growth from mid-May through to the end of September; another reason for only requiring two full time staff topped up with two additional seasonal greenkeeper support workers.

Even in the height of the growing season, they are able to cover all mowing operations, cutting the rough, fairways and tees and approaches twice a week, with the greens cut or rolled six days a week.

The club is on a mission to improve the course using all the resources they have at their disposal. I am sure Jonathan and his fellow Greens Committee members and Board of Directors, along with the volunteer groups, will succeed in meeting their targets set for the centenary celebrations in 2025.