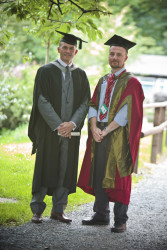 Speaking about the graduation of Neil Stubley, Dr Andrew Owen, Lecturer in Sportsturf Agronomy, said: "It was a privilege to have Neil at College for the ceremony. With preparations for the London Olympics underway at Wimbledon, I'm grateful he took the time to attend today and join us to celebrate the achievements of our Sportsturf students.

The surfaces at Wimbledon have never looked better and great credit must go to Neil and the team there, which includes several other ex-Myerscough students. Everybody at the College was delighted to hear that Neil was appointed Head Groundsman Designate and hopefully he can implement some of the things he has learnt through the College into his daily work."

Myerscough College's ceremonies mark the culmination of years of hard work and see many students presented with outstanding achievement awards, in recognition of their efforts and commitment to their courses throughout their time at the College.

Student awards are judged by tutors, lecturers and the students themselves, with many prize categories sponsored by industry in recognition of the high levels of academic teaching and practical learning whilst studying at the College. The Sportsturf prize winners for 2012 are: 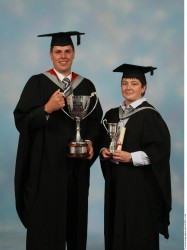 Commenting after the ceremony, Myerscough's Assistant Head of HE Sportsturf, Stewart Brown, said: "All the prize winning students were chosen because of their hard-work, dedication and commitment to their degrees throughout their time at Myerscough College. I've no doubt the prize winners will forge successful careers and benefit the industry enormously. Everyone at College wishes them the very best of luck for the future."

Congratulations from everyone at Myerscough College, and best wishes for the future.