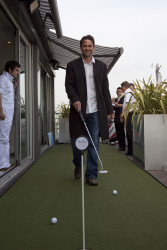 One of the world's leading suppliers of all-weather surfaces for golf is helping a host of celebrity golfers raise vital funds for a leukaemia charity.

Hampshire-based Huxley Golf is providing an artificial green for a putting competition at the 2010 Leuka Mini Masters sponsored by Bing.

Celebrities such as Leuka patron Dougray Scott, star of Mission Impossible, will compete to hole a 35-foot putt on the surface alongside the main par-3 tournament at Dukes Meadows in Chiswick.

The putting competition has been carried over from a promotional launch in May, when no-one managed to hole a competitive putt on a Huxley green laid out on a balcony at the May Fair Hotel - dubbed London's highest putt by event media partner Esquire.

The prize, an Omega Seamaster watch, has also been held over and could now tempt confirmed tournament captains such as Hugh Grant, Rob Brydon, James Nesbitt, Phil Glenister, Johnny Vaughan and DJ Spoony.

The Leuka Mini Masters sponsored by Bing is in aid of Leuka, the leukaemia research charity based at London's Hammersmith Hospital.

Eighteen teams of three guests will be joined by a celebrity captain over two circuits of nine holes with barbecue lunch served in between and a summer garden party vibe throughout.

During play, there will be live music and light-hearted commentary from guest announcers. The event takes place on 16 July.

Paul Chester, Huxley Golf Sales Manager, said: "As its name suggests, Mini Masters is a fun, tongue-in-cheek golfing tournament. We were surprised that no-one holed a putt at the launch but we are delighted to supply another putting green to help raise as much money as possible for Leuka. It gives everyone a second bite at the cherry."

Portable Huxley Putting Greens are used by some of the world's top golfers and courses to help show visitors just how accessible and enjoyable the game can be.