Celebrity gardener and television presenter Alan Titchmarsh, addressed graduating students of Writtle College today during a special ceremony held at Chelmsford Cathedral, Essex.
During his address Alan said: "I have been attending these ceremonies over several years now, I've lost count of how many, and yet the achievements of the students never ceases to amaze me."
As Patron of Writtle College which is a partner of the University of Essex, Alan went on to endorse the specialist skills that graduating students will take into their selected employment fields, saying: "Knowing what I have learned about this College and the kinds of people that Writtle turns out, I have no doubt that our landscape is in the safest of hands."
An Honorary Doctorate was also awarded today to Essex sportsperson, Sally Gunnell in recognition of her services to sport and the promotion of well-being. Other Honorary Doctorates were presented to Peter Philpot, owner of Barleylands in Billericay Essex, Christine Walkden, a celebrated horticulturist, and Wol and Sue Staines supporters of undergraduate horticultural and garden design students.
Graduates were presented with their degrees by Principal of the College, Professor David Butcher, alongside him was Nigel South, Pro Vice-Chancellor from the University of Essex. Tomorrow (Friday 10 Sept) Graduates will be addressed by Graham Gooch, former cricketer and presented by Dr Colin Riordan, Vice- Chancellor from Essex.
A total of 220 students will have graduated over today and tomorrow from the specialist College's subject areas in Horticulture, Sport, Equine & Animal Science, Design, Agriculture, Conservation and Management Studies. 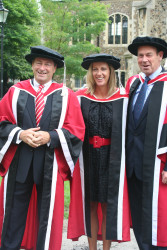 
Peter Philpot has made an outstanding contribution to agriculture and to the education of school children on rural life and history, most notably through the Barleylands Farm Park and Craft Village in Billericay Essex.
Sally Gunnell OBE is the only woman ever to hold four major track titles concurrently - Olympic, World, European and Commonwealth - and is one of the UK's most popular female sportspeople.
Christine Walkden's passion for horticulture blossomed at an early age of just 10 when she first obtained an allotment and started growing vegetables and flowers, Since then, she has gone on to become one of the most celebrated horticulturalists in the UK. Now, a household name, Christine is known to millions through her regular appearances on the BBC's The One Show, Gardeners' World and her own series, 'Christine's Garden'.
Wol and Sue Staines have supported undergraduate horticultural and garden design students at Writtle College for many years, allowing them access to their private garden, Glen Chantry. The garden contains a unique collection of plants displayed in a creative and inspiring way.

A partner of the University of Essex, Writtle College is a specialist provider of Higher Education and Further Education courses covering Horticulture, Design, Equine & Animal Management and Sustainable Environments. Founded in 1893 the College has trained generations of graduates who have made significant contributions to enhancing the environment and landscape. Today, the College combines its heritage with a cutting edge training approach to prepare its students for the future challenges in the specialist areas in which it operates.