CREATING world-wide attention, all was in hand for the prestigious Wales Open to take place at the Celtic Manor Resort, Newport.

Sitting on top of a valley ridge, this Robert Trent Jones Jnr's inspired course will host the Ryder Cup Matches in 2010.

"I went to the Resort at the end of May to make sure Jim McKenzie, Director of Golf and Course 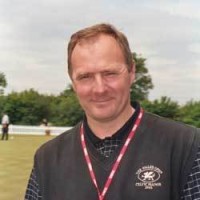 All was in hand for this PGA European Tour event and the height of cut was taken down to 3.25mm.

More than 120 mowers are used at the event, including Toro Flex 21 greens units.

"Good greens are vital as they are the shop window of the golf course, " says Head Mechanic at the Resort, Cal Callaby.

Work started at 5am and ended at 10am - with 45 staff, including the garden crew, carefully tending the course and grounds.
"Early season tournaments are a bit of a problem as there is no time to train people up so we just use them to rake the bunkers and divot," says Jim McKenzie. "There are 20 full-time greenkeepers but by the time six guys cut the greens, four cut the fairways and some are used to set up the course, suddenly you have nobody spare for any issues which might arise."

Final height of cut on the greens was 2.25mm - the lowest ever.
"Players like to play as close to death as possible," says Jim, "and they are loving it."

For a FREE demonstration or further information call Kim at Bernhard and Company on: 01788 811600 e-mail info@bernhard.co.uk