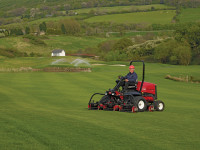 Celtic Manor Resort's director of golf, Jim McKenzie, has taken time out of his preparations for the Ryder Cup to pay tribute to the Toro turf maintenance machinery helping him ready The Twenty Ten Course for the prestigious tournament.

The resort in the Usk Valley, South Wales, has been an exclusively Toro user since the early 90s and, following the opening of the challenging 7,493-yard, par 71 course specially constructed for the famous tournament, Jim has added a number of new machines to his already extensive fleet.

"We've been a 100 per cent Toro user since 1993," Jim reveals, "and in that time we've never once used another make of machinery - we have such a good relationship with Toro, distributor Lely UK and our local dealer, Ted Hopkins Limited, that we'd never consider going elsewhere."

In recent years, the resort has invested mainly in new mowers - but with the Ryder Cup fast-approaching, Jim decided to invest in a fleet of new Toro utility vehicles. "We've added 11 new Workman MDX machines to our existing four," he continues. "They are outstanding at moving equipment and materials around, particularly getting mowing equipment across The Twenty Ten Course. We've also bought two new heavy-duty Workman HDX utility vehicles, which we'll be using for topdressing the greens, spraying and fertiliser applications."

Jim has also invested in some new mowers, not only for use on the Ryder Cup course, but also to tend the resort's other two 18-hole championship courses - The Roman Road and The Montgomerie. "We've bought some new 14-bladed Greensmaster Flex 21 pedestrian triple greensmowers for use on the other two courses. We are looking a little further ahead than just the Ryder Cup! Our other courses are also open 52 weeks a year to players, who expect very high standards from Celtic Manor."

Jim will also be relying on Lely's special Toro tournament service to supplement his machinery needs come the big event, which takes place from 1 to 3 October. "We will be using the tournament support fleet and are discussing our needs with Lely and Toro. But we're very fortunate here, having three courses - we have about £900k of equipment between them - so we can direct kit from the different courses according to our needs."

With The Twenty Ten Course set to close 6 September for final preparations for the 38th Ryder Cup, Jim says excitement is growing. "Everyone's starting to get quite excited, but there's still an awful lot of work to do both on and off the course. When we close the course we'll have three weeks of no play and a really intensive maintenance period. Because staff won't be doing the day-to-day tasks around the course, we'll be able to redirect them to do other jobs to prepare. We have a team of about 40, plus we'll have an extra 70 volunteers to help us."

However, Jim is confident that preparations will go smoothly. "You can't start chopping and changing for these types of events - it just confuses things, makes things difficult to manage and there's more potential for things to go wrong. We have a tried and tested 'blueprint' for preparations - for example, our height of cuts will remain the same as for the summer for the most part. We'll be using our Toro Reelmaster 5410-Ds on the fairways, Reelmaster 3100-Ds on the semi-roughs and our Greensmaster 1600 pedestrian mowers on the tees and approaches."

Jim also says that reliable Toro equipment offers further reassurance when preparing for an event of this magnitude. "Hosting the Ryder Cup here at Celtic Manor Resort is also very prestigious and important for Wales. It is the third largest sporting event after the Olympics and the World Cup. To prepare and maintain the course to the very high standards required, we need continuity of product and reliability - you've got to have confidence in the product. You can't have mowers breaking down and spilling oil over your course when you've got a major event on. For us, Toro equipment is essential to us being able to achieve the standards required for these major events."

And having been awarded the Ryder Cup back in September 2001, Jim says that Toro and Lely's support was key to Celtic Manor's winning bid to host the tournament. "We've undergone a huge amount of development, hosting other major events in the build-up to winning the Ryder Cup and Toro and Lely are probably our biggest partner in terms of development. I'd like to thank the guys at Toro and Lely - their advice and support has been invaluable. Here's to a hugely successful Ryder Cup 2010!"