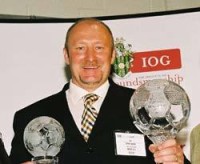 "I'm really overwhelmed by this award," said John, 46, who has been at Glasgow's Celtic Park for 28 years. This award is not only for me but for the staff who have worked so tirelessly to keep the pitch in such great shape."

He said his father, who died when John was 15, would have been very proud, having been a Celtic supporter all his life. John and his wife Patricia have three children - John Paul (26), a joiner, Kelly Marie (24), in the car trade, and Sean Patrick (19), an electrician. John started at Celtic Park after leaving school on a job creation. A vacancy came up while he was at the club and he realised that it was the job he really wanted. "Originally I wanted to be a joiner but became really interested by all aspects of the job of being a Groundsman. There is no better experience than seeing the pitch you have tended from the stands."

John was assistant to Joseph Docherty who left the club 15 years ago, since when John has been head Groundsman with his deputy Mike Cook and staff Andy McCann, James Brady and Graham Cartwright. All have achieved advanced levels in sportsturf management exams at Elmwood College.

Celtic Park, nicknamed 'Paradise', seats 62,000 in a stadium that's 10 years old. In 16 years they have only had to cancel one game which was caused through a breakdown in the undersoil heating when snow hit. Two years ago the pitch had a mid-season renovation, carried out by SIS, which involved relaying 40mm of turf over a new four-inch rootzone.

The total six to eight-inch rootzone is a 70-30 mix which lies over the original black ash subsoil. Irrigation, not often needed in this wet area of Glasgow, is supplied by pop-ups and drainage is carried out through pipes set at six-metre spacings to either side of the pitch and then out to main drains.

John works with pitch consultants PSD and sees Mike Harbridge, John Hacker and Bill Gillespie on a regular basis. Celtic has a groundscare equipment sponsorship deal with SGM (Scottish Grass Machinery). John is a firm believer in aeration and regularly uses a Charterhouse Vertidrainer. In the course of a season the Celtic pitch has between 35 and 40 games played on it - including 16 to 18 Premier League games, European games and sponsor's matches.

Celtic are currently top of the League and in the semi-finals of the CIS Cup. John's top pitch award came after marks from managers and referees put him at the top of the Premier League. The award was given after judges interviewed him on factors such as available resources, presentation, management skills, technical knowledge and scope of operations.

" I really have to thank the staff for their help and support," said John, who works closely with the Celtic manager Gordon Strachan, who was formerly at Southampton and used to play for Manchester United, Aberdeen and Leeds. "This is the pinnacle of my career and I would say to any Groundsman to follow basic principles for success. Follow your instincts. Do what you think is right and stay off the pitch when you could do damage".