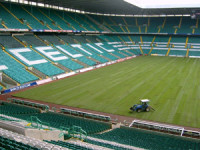 Celtic FC, currently leading the Scottish Premier League, had their pitch completely rebuilt and returfed in a project that took only six days.

The pitch was ready for the Club's next home game, thanks to special techniques and technology developed by SIS (Support in Sport) Ltd, who handled the reconstruction, working with Bill Gillespie and Mike Harbridge of PSD.

Celtic decided the new pitch was essential mid-season to cope with the sheer number of matches that the club's success is bringing about. Originally, work had been scheduled to begin in the close season.

Involvement in the Champions' League, UEFA Cup and domestic football has resulted in a great number of midweek and weekend matches, as well as European training sessions on the pitch.

"Head Groundsman John Hayes and his team have worked wonders with the pitch in difficult circumstances," says Celtic's Executive Director, Peter Lawwell. "However, the heavy use of the pitch, combined with a recent period of poor weather, has meant the surface has deteriorated."

SIS specialises in rapid turf replacement projects. Using purpose-built equipment, their technicians removed the top 15cm (6in) of soil, amounting to 1600 tonnes. Then, 1200 tonnes of new rootzone material was brought in prior to returfing.

Removing so much soil is unusual but it overcomes a problem known as 'black layer'. This is where compacted soil and organic matter form a dense, infertile mass, severely restricting healthy grass growth. SIS co-ordinated a fleet of 26 refrigerated lorries to deliver the new turf from growers in Germany where specialist, hard-wearing sports turf is farmed.

"Celtic have taken a brave, but correct, decision," says SIS Chief Executive Officer, George Mullan. "They seized a two-week window of opportunity between matches to achieve a state-of-the-art pitch. Thanks to our specialist approach, today this is achievable."

Celtic are just the latest top team to benefit from SIS' skills. Similar contracts have been carried out at The Millennium Stadium, Cardiff; Old Trafford, Manchester; Hampden Park, Glasgow; the Amsterdam Arena in Holland, and the Delle Alpi Stadium in Turin.