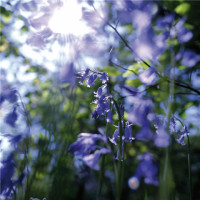 Center Parcs are adhering to their biodiversity policy by choosing nearly 40,000 of our native Bluebells over the invasive Spanish rival species.

Supplied and grown by specialist Norfolk nursery British Wild Flower Plants (BWFPs), the Bluebells have been propagated from seed collected from existing plants at Sherwood Forest Center Parcs where the Bluebells will be planted and other areas throughout the UK.

Linda Laxton, BWFPs owner and MD says that the seeds were sown 18 months ago into 13,000 pots and have taken two winters to grow. "The Spanish Bluebell is a completely different species compared with our native plant. It's very vigorous and very aggressive," she explains. "Because the flowers are larger than British Bluebells the Spanish species were sold by garden centres and are now in danger of taking over. If they are grown in a private garden near woodland there's a strong possibility that they will interbreed."

Darren Bowsher, Ground Services Manager at Sherwood Forest Center Parcs says that there was never any question about which species would be chosen. "I came here 23 years ago when the 450 acre site was bought from the Forestry Commission and it was an all pine plantation," he remembers. "Since then we have brought it back to traditional English mixed woodland. We've got four different types of oak - English, Sessile, Red and Turkey, Chestnut, Silver Birch, Beech, Alder, Willow and every type of native hard wood. I'm working to a full species management book that includes every shrub - Guelder Rose, Gorse (for the bird's nests) and Hollies - and our policy is to grow nothing but our native species. The Spanish variety of Bluebell wasn't ever considered."

The native bluebell plants (approx 40,000) will be planted as plug plants, at Center Parcs Sherwood Forest this spring.