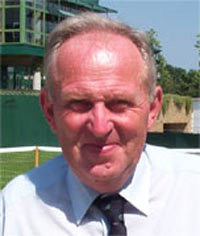 Heaven may not exist but, on a sunny afternoon in June, the grounds of Wimbledon provide a workable approximation. Flowers are plentiful and co-ordinated in shades of purple and white with green foliage, the colours of the club. The air is heavy with the scent of cut grass and wet paint.

Over on Court Six, the six-times champion Roger Federer warms up for the 2012 tournament by elegantly wasting the Canadian hotshot Milos Raonic in a practice match. With no ballboys, just a handful of privileged onlookers, the Swiss is even required to retrieve his own balls - quite an ask for a man who usually requires assistance removing the cellophane wrapper from a new racket.

On the Centre Court, the scene is even more idyllic and its curator, the head groundsman Eddie Seaward, surveys the arena with obvious pride. He is 68 now and has been master of this domain - "the grass whisperer", he's been called - since the days of Stefan Edberg and Steffi Graf in the early 1990s.

Still, this summer provides a new challenge, probably the toughest he has faced in 22 years in the job. Not only do the courts have to be immaculate for the Wimbledon Championships that begin on Monday, but after the men's final on 8 July, Seaward and his team have just 20 days to repair the wear, tear, scruffs and scrapes before the Olympic tennis event begins.

Phase one, at least, looks in good order. The lawn is shaved to an 8mm stubble, just how Seaward likes it, and when Novak Djokovic opens proceedings on Monday there will be nothing approaching a blemish or discolouration. Even the shade of green has been specifically calibrated: too lush means too much nitrogen in the grass leaf and a slippery surface for the players.

The hardness of all courts - 19 for tournament play, 22 for practice - is measured with a Clegg hammer, so as to be near-identical. Blades of grass have been counted - this is not a joke; there is an optimum number per square centimetre, apparently. How many is that? "A lot," says Seaward.

It is an odd job, when you get down to it, full of unexpected pitfalls. Seaward's greatest fear? Vixen urine. It kills the grass and, worse, the soil under it - Seaward shudders at the memory of a final in the 1990s where fox wee appeared overnight between the service line and the baseline, visible from the Royal Box, leaving a small soft area on the court.

"If you come here on a nice sunny Sunday in winter, you'll find foxes laying up on the BBC commentary box there," he says. "They like to sunbathe and they will look at you as if to say, 'What the hell are you doing here? This is mine - it's Sunday!'"

These days, Wimbledon's show courts are encircled by an electric fence for weeks before the event, and patrolled at night by guards with dogs. It's just one of the many changes that Seaward has overseen during his tenure. Rufus, an American Harris hawk, drops in three times a week to ward off pigeons - the sulphur in their droppings burns the grass.

Seaward is also in regular contact with the Sports Turf Research Institute in Yorkshire to ensure they have the perfect surface. The current mix, introduced last year, is 100% perennial ryegrass, with a combination of Jessica, Pontiac and Melbourne strains. It is harder beneath your feet, less vulnerable to wear and maintains an improved colour throughout the winter.

The turf is sure to come under scrutiny during the Olympics, but Seaward is not fazed. A few days before the championships end, he will start pre-germinating seeds and, as soon as the trophies are handed out, his team will go to work. They will oversow the baseline, where coverage is most scarce, and feed the rest of the grass. Any divots will be filled with wet soil - "like a Polyfilla" - sprinkled with grass clippings and left to dry overnight. "I'll challenge you to come out here and find where we've done it," says Seaward.

Locog were concerned enough to demand a trial run and so, after Wimbledon 2010, Seaward was given 20 days to get his lawn in order. He had a similar deadline for the filming of the 2004 romcom Wimbledon - that movie may not have been faultless, but the grass was. "They wanted a pristine court and they got a pristine court," says Seaward. So rest assured: the crowds might be rowdier, the players' garb more colourful, the logos more brazen, but the 12 courts they are using for the Olympics will be as flawless as always.

Seaward is retiring after the Olympics - is he planning to spend more time in his garden? "My lawn doesn't look like this, before you ask," he says, smiling.

"It's predominantly rye but there are a few weeds and it's a bit longer and thatchy. The presentation is similar though - we're selling the house now and one or two people have said they like it, because it reminds them of Wimbledon, if you like."

Seaward's advice for his successor, 43-year-old Neil Stubley - who has already worked at Wimbledon for 17 years, a decade as his deputy - is simple. "It you get everything right, you can commit murder and get away with it," he says. "If you get anything wrong, don't sneeze in the wrong place. That's it: I personally can live with that and I'm sure he can as well."

Article sourced from The Guardian