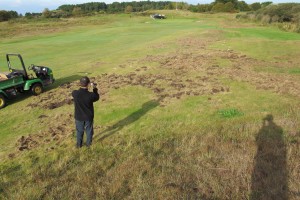 Ashburnham Golf Course is located close to Burry Estuary and Worm's Head in the South West of Wales.

The Amateur Home Internationals have been held there several times as well as the Ryder Cup Wales 2010 PGA Welsh Open. It is a superb 117 year old links course that drifts seamlessly into the neighbouring sand dunes.

Harry Vardon a Jersey professional golfer who won the Open Championship a record six times and also won the U.S. Open said that it was "The course I like best in Wales".

The Course have been experiencing problems with Chafer grubs since the beginning of 2011, Paul Hopkins, the Head Green keeper, returned off holiday late summer time that year, to discover a sight that he'd been dreading.

They had experienced problems in the previous two years in the rough areas of the course; however the chafer infestation had moved out onto the fairways.

In previous years it has

simply been a matter of repairing the damage caused by predators who are seeking an easy lunch.

At one stage 48 magpies were dispatched over a 6 day period, but this did little to resolve the problem and Huw Morgan, the Golf Club manager, had to resign himself to removing the food source of the predators.

There are six species in the UK: the Welsh Chafer, Summer Chafer, Brown Chafer, Cock Chafer, Garden Chafer and Rose Chafer. The most familiar being the Cock Chafer or 'May bug' a large beetle that can be heard as a low droning noise on pleasant spring evenings.

The grubs feed on the roots of grasses and other plants, their presence can be detected by the yellowing patches that it cr eates in turf. Chafer grubs can be found in the soil under the loose turf.

They have stout white bodies curved in a C shape, light brown heads, with three pairs of legs and darker patches at the base of the abdomen. They are bigger than the adult beetles although their size varies according to species, 8-35mm.

They live within the soil for up to 3-4 years going through various 'instars' as they develop.

The real damage to turf is done by predators such as starlings, rooks, crows, jackdaws, magpies, foxes and badgers that make the most of an abundant high protein feed lying just beneath the surface.

Huw Morgan, the Golf Club Manager at Ashburnham, had many years of experience as Course Manager at The Wildernesse Golf Club in Kent. Huw became aware of the problem and appraised the options that were available to him. Merit Turf can be used to control Chafers although the on-label recommendation is that it needs to be applied before the egg-laying activities of the target pests in the late spring/early summer.

It also needs to be applied when sufficient rain is forecast or it needs to be irrigated in through the thatch and into the top inch of soil within 2-3 days otherwise the Merit Turf will start to degrade because it is light sensitive.

Given that there was no likelihood of being able to fulfill these constraints, Huw looked at the alternatives and approached ALS for advice, a company that he'd used successfully for professional pesticide application several times.

Ray was able to visit the site and use his expertise to recommend an application of nematodes as a control strategy for the chafers.

The species of nematodes, Heterorhabditis megidis, is host specific and only feeds on white grubs such as Chafers. Becker Underwood are major suppliers of biological controls to the horticulture and agricultural sectors.

Providing the soil is sufficiently moist to allow the nematodes to move within the soil, the nematodes seek out the chafer grubs and attack the pest by entering natural body openings.

Once inside, they release bacteria that stops the pest from feeding, quickly killing the pest. The nematodes reproduc e inside the dead pest and release a new generation of hungry infective nematodes, which disperse and search for further prey.

Karl Geary of Becker Underwood arrived in the early hours of a September morning in 2011 with a hundred 500 gram trays of nematodes, each containing 250,000,000 nematodes. The ALS contracts team had previous experience of applying biological control methods and determined the conditions of the day as ideal for the neamatodes to be applied.

Karl carried out some exploratory work and was able to ascertain the level of infestation recording 144 grubs per square metre.

The ALS contracts team carefully calibrated a water volume rate of 2000 litres/hectare in conjunction with a wetting agent to ensure that sufficient numbers of nematodes are applied and come into contact with the Chafers.

This volume of material applied over 15 hectares of the course required two specialized spraying rigs, the operatives were ready to start at 6.30 am and completed the task without impacting upon a society playing that day.

Huw Morgan has worked hard to communicate to the club membership the problem and what would be required to resolve it. gh understandably frustrated by the damage caused by the Chafer grubs, understood that the problems were beyond the abilities of the green staff to control and responded positively to Huw's request to deal with the problem.

Having such wonderfully firm fescue greens in such a beautiful location and to have the course damaged by an agent outside of their control was an exasperating time for Huw and his team, however the problem was resolved thanks to some inventive thinking and the support of ALS, Becker Underwood and Everris.

Huw recently cheerfully related that he's had no further problems with Chafer grubs and states that he thinks that this is due to the application of nematodes applied in 2011.

If you suspect chafer infestations are causing damage to your green or turf, contact a technical advisor on 01952 641949. For nematode application enquiries contact ALS contracts on 01952 259281.

View a range of biological nematode controls online in the Pitchcare Store.