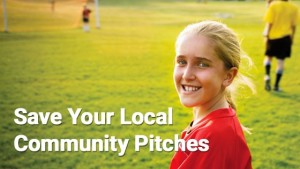 The money being asked by Greg Dyke (FA CEO) to install up to 500 artificial pitches at a cost of more than £300m has been tabled due to the poor condition of most of the UK's open spaces, which are home to over 8000+ park pitches.

If the Government would ring-fence Local Authority spending on these open spaces, instead of asking councils to continually cut costs (we are now at a point where pitches are unplayable in winter and there appears to be the need for plastic), we would be able to have a large number of quality natural grass pitches, a healthy environment, and open space that can be enjoyed by all.

Councils have had to reduce their maintenance, pitches have become compacted, retain water and with minimal mowing regimes and marking out, have become poor surfaces for sport. For the equivalent money or less, that Greg Dyke is asking for, most of the 8000 pitches could be brought up to a decent specification and weekend sport could be enjoyed by so many more people again on a natural playing surface.

The UK is lucky to have a climate conducive to producing and maintaining natural turf surfaces. Before council spending was capped and then reduced, most parks were maintained to a reasonable level and cancelled fixtures were rare. The technology,
machinery and expertise available in the UK today, is second to none and with investment here, well maintained natural turf surfaces would help raise participation and standards of play.

I don't know many people that wouldn't prefer to play on a good quality natural grass pitch over a synthetic (shredded car tyre filled) plastic carpet. Players worry about playing on poor pitches, but worry also about the impact and injuries on their joints, knees and hips when constantly playing on a surface that is a lot less forgiving than natural turf.

Having maintained sports surfaces for more than 25 years, some at the highest levels, there isn't a need to spend money on new artificial surfaces where we already have all the pitches in place, they just need to be returned to a reasonable level of care.

If our parks and open spaces continue to decline with the current neglect, lack of budget and support from sports governing bodies and the politicians at Westminster, we will see unsightly areas, and the loss of our heritage and valuable environmental open spaces used for other purposes.

The natural Sports Turf and Amenity Industry need all amateur and professional players, spectators and local communities to voice their concern over the neglect and loss of our open space, because as yet, it seems Greg Dyke and the Government have not been provided with a solid counter argument.

If you would like more information, here is a link to an article with some facts and figures:

We have always stated that there is a place for artificial surfaces, but the FA and the Government seem to be giving up the ghost and taking the easy option rather than the sensible and environmentally beneficial natural turf route.

If you value well presented and maintained natural sports surfaces within the parks in your community, challenge the FA and Greg Dyke to reconsider their policy. Please give your support to protecting UK sport on natural grass.