by Rosie Duckworth
in Industry News, Machinery & Mechanics, and Golf
on 08 Aug 2015 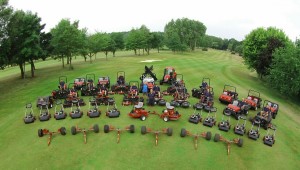 "We host the Senior PGA in honour of Bernard," says David. "He was the first head professional at Foxhills and was here for 25 years. With this high-profile event and many others being played on both the 18-hole Bernard Hunt and Longcross courses and the par-three nine-hole Manor course we knew we needed a machinery fleet we could rely on to deliver championship quality all year round. I have worked with Toro for most of my career and for the last twelve years here at the club so I knew it was up to the task."

David says of the machines: "The new TriFlex 3420 mowers replace the old 3400s on the greens. Their electric heads are really impressive and their arrival means we have bumped our older 3400s to the surrounds and approaches. The old and the new working in conjunction with each other on different parts of the course is so far a success."

Supporting the TriFlex on the greens are the Greensmaster 1000s and GreensPro 1240s. David says: "The new iron is a vast improvement. There's much less drop-off and build up on the rollers now. This is a model where you can really see the design improvements."

Working on the surrounds and tees are the Greensmaster 1600s. The fairways are taken care of by the Reelmaster 5510s and Groundsmaster 4500-Ds, and the Groundsmaster 360 is being put through its paces on the tree lines on the Longcross course, which has recently been named a top 100 course in the UK.

"The Longcross is generally considered to be one of the best examples of a tree-lined Surrey course," says David. "We've got Scots pine, beech and silver birch trees and we're finding the 360 is fantastic at getting into the tight areas between the trees. It saves us a lot of time, too, height changes can be done in about five seconds!"

Managing a team of 15 greens staff David says he decided to purchase the TYM tractor alongside his Toro machines because of his relationship with the two brands' distributor Lely Turfcare: "The TYM has some really nice features such as all-round visibility and automatic pto. All the guys on the team really enjoy using it."