Anthony Asquith has recently been promoted to Head Groundsman at Chapel Allerton. Taking over from his father (a role reversal). They have been working together ever since Anthony started as an apprentice at the club some seven years ago. Anthony has been very proactive continuing to increase is knowledge and education along the way. Culminating in Anthony recently completing is NVQ level three certificate in sports turf management.

Anthony is always keen to improve his knowledge and understanding of Groundsmanship by sharing his experiences. with other groundsmen who frequently call in at Chapel Allerton for a pint or two, especially by many members of the West Yorkshire / Leeds IOG branch.

The club boasts a wide range of court surfaces 16 tennis courts and 5 squash courts to manage, with the club having six natural grass courts, six sand filled artificial carpet courts, one tarmacadam and three indoor courts. The club hosts a number of major tournaments each year including the Yorkshire Championships and the Yorkshire Veterans. The club are very good at underwriting our budget for whatever we need, and every year they find enough money for a couple of items of new machinery, as long as we have argued the viability for them. 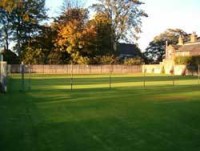 It has been quite a challenge for us this year with the weather being so variable, this years wet weather certainly kept us on our toes, especially during the busy competitions that were held in July, when the courts where in constant demand. 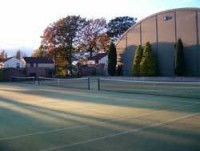 The grass courts are scarified down to 6mm in the direction of play and on a diagonal run in several passes, this removes the unwanted thatch debris from the paying surface. Once we completed the scarifying we applied a pre-seeding fertiliser to each court, before seeding and top-dressing with Kettering Clay loam (18-20% clay content) applied at a rate of 4 tonnes per court. A fairly light dressing to even up any surface irregularities. Addition material is used to repair the traditional base lines and court damage areas. 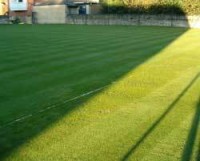 The courts are now being maintained and will be kept at a height of 12-13mm for the winter period. A recent attack of fusarium as been found running along the shaded areas of the courts and particularly down the lines of the court. We keep a close check for disease and monitor any outbreaks. Sometimes they are contained and die out, sometimes we may spray an application of Rovral Green.

With the recent wet weather worm activity has been on the increase, so i have recently applied a dose of insecticide (Active ingredient carbendazim) using a product called Ringer by SumiAgro Amenity.

Soil analysis is also important. I generally have a number of tests done on the courts each year to keep me informed about soil nutrients and soil pH status. This helps me gauge what my feeding programmes will be. This year we changed from applying slow release fertilisers to a straight fertiliser regime with an additional programme of liquid foliar feeds tailoring the feeding to what the plant needs during its growing season. 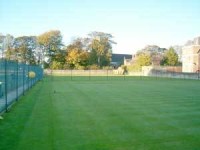 As we move into the winter there are always more things to improve upon, the irrigation system being one of our agenda items. I would like to facilitate a fully automated pop up watering system that will let me have better control of the water inputs on the courts, both increasing the efficiency of watering and saving on valuable water resources.

Another wish list would be the buying of some court covers that can be used to cover the courts to help control the moisture levels of the soil profile, this in turn will lead to better preparation of the court surfaces, greatly increasing the performance of the courts for the players.

As a consequence of Anthony's quest to gain more knowledge and information he has organised a forth coming groundsmanship seminar were Peter Craig Head Groundsman from the Hurlingham Club will be guest speaker. Discussing many issues in relation to maintaining and managing natural grass facilities ( Bowls, Tennis , Cricket, Croquet).

The seminar will be held at the Chapel Allerton Tennis Club at 2 pm on Monday 15th November 2004. The seminar is free with refreshments provided. For further information please ring Anthony Asquith at:-