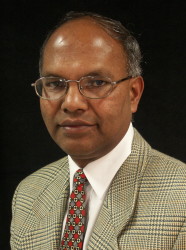 The issue and the objective

There is an estimated area of 40, 000 ha of sports turf around New Zealand. Organic matter plays a pivotal role in golf course and general turf management through its influence on most processes that collectively determine 'turf health' or 'turf quality'.

Thatch accumulation can be minimised through proper management practices that include adequate drainage and controlled-release fertilizer use to regulate turf grass growth rate (Callahan et al., 1997).

However, when the thatch accumulation reaches a 'threshold level', additional control measures are required. Current practices of thatch control in sports turf involves mostly mechanical/cultural measures and are primarily aimed at dilution (through topdressing with sand or soil) or removal of the thatch (through coring, dethatching and verti-cutting) (White and Dickens, 1994).

Frequent applications of these control measures are required. These thatch control methods are invariably unpopular because they are both costly and also impact the playing conditions of the green. Recently there has been increasing interest in the use of soil amendments that reputedly enhance the microbial activity of greens to induce the decomposition of thatch material (Carrow, 2004).

The nature of growing medium and the management factors (soil fertility, drainage conditions) affecting the decomposition of thatch and the mechanisms involved in controlling thatch accumulation have been examined in detail, both under controlled glasshouse and field conditions. We are also hoping to evaluate the effectiveness of commercially available thatch decomposing products under controlled conditions.

The information obtained from this research will be used for predicting the consequences of various management regimes on turf performance, and providing a scientific rationale for the interpretation of turf quality indicators.

The study has involved laboratory incubations, and glasshouse and field turf growth experiments. Firstly, soil cores were collected from a number of golf greens and other land use systems and the quantity and quality of organic matter accumulation in these cores examined.

Cores seen on right:- Figure 1. Soil cores from golf green used for the fractionation of organic matter in the thatch samples

Secondly, the rate of decomposition of various organic matter components in the thatch layers from various greens was examined using laboratory incubation experiments. We are also hoping to carry out a study to examine the effect of various thatch control measures, including reported thatch decomposing products on the rate of degradation of organic matter.

Twenty five soil cores were taken each from a permanent pasture, two sand based golf greens, one soil based golf green and a pine forest. The thatch layer was separated from the soil cores and the remaining soil cores were sectioned into two layers (Figure 1). The litter layer from the forest soil was also collected. A composite sample was prepared by mixing the appropriate slices from the 25 cores samples for each site.

Where EOC is the increase in extractable organic carbon in the fumigated soil over the non-fumigated soil and Kec represents the efficiency of organic C extraction (Sparling and West, 1988). ed by a sample of soil using a Gilson differential respirometer (Macgregor and Naylor, 1982).

Characterisation of thatch and organic matter in different land-use systems

Graph on the right:- Figure 2. Organic matter content of thatch, litter and soil layers in different land use systems


The fractionation of organic matter indicates that both the thatch material and the litter sample contained low levels of exchangeable carbon compared to other carbon fractions (data not shown).

More than 50% of the organic matter obtained from all thatch and litter samples remained unextracted in any of the extractants (i.e. residual fraction), indicating high levels of carbon in structural and stabilized components. The thatch material from the pasture soil and the forest litter contained higher residual fraction levels than the thatch materials from the golf greens.

The microbial biomass was higher in the surface layer (0-3cm) than the subsurface layer (3-6cm) (Figure 4). This could be attributed to the higher level of root proliferation in the top layer of turf grass.

The microbial biomass carbon was higher in the s

Graph on the right:-Figure 4. Microbial biomass in soil samples collected from the field experiment

Table 1. Microbial activity as measured by respiration (cm3/kg/hr) for selected treatments from the field experiment