The Indespension Trailer Centre at Ipswich have had to work on some unusual trailers but recently they have been presented with a special challenge. For over 30 years the Ipswich Round Table have been towing a "Rudolf the Red Nosed Reindeer" trailer around the streets of Ipswich in December. As Rudolf is towed around the streets of Ipswich, accompanied by Christmas lights and festive music, 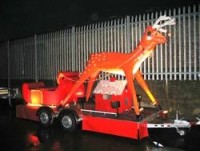 Each year the trailer has been serviced free of charge by Indespension but this year they had to report that it was at the end of its life and had to be replaced. Indespension managed to get a special deal on a Brian James trailer but that was only a part of the problem. Rudolf was in reasonable condition and could be fixed to the new trailer but everything else had to be replaced including the sleigh holding the electrics and sound system. For the last 3 months that work has been going on, sometimes during the day time permitting, but mainly in the evenings when the staff gave their time free of charge. The result is a brand new state of the art Rudolf trailer.

Branch Manager Adrian Kersey commented. "All of the staff at Ipswich have given up so much of their time on this project. We are very pleased to have played a small part in ensuring that this important charity work can continue for many more years."