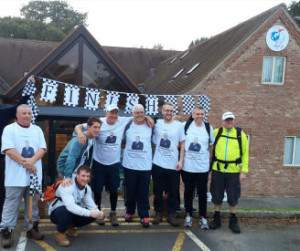 The event, in aid of the BIGGA Greenkeeper Benevolent Fund, was the brainchild of Stocksbridge Golf Club's Wayne Lazenby. Using the wonders of social media the idea took off and ultimately Wayne was joined by his colleague Richard Marshall, the course managers of Patshull Park and Lickey, Mal Mitchell and Dave Collins, Deputy Course Managers of Aldwickbury Park and Redditch, Martyn Brown and Harvey Brooke, along with Geoff Fenn from Countrywide and Ryan Anderton from the Highspeed Group. The two day, 54 mile walk commenced early on Saturday morning at Stocksbridge and they finally reached BIGGA House at around 6.30pm last night. There were blisters aplenty but spirits were extremely high.

The group were ably assisted by Eddie Ainsworth, course manager at Avro GC and Sharon Morris of Mansfield Sand who acted as support drivers, transporting luggage and supplies.

To date the walk has raised over £2,000 for the Benevolent Fund and it is still possible to donate, go to www.justgiving.com/david-collins20