by Louise Prettyman
in Machinery & Mechanics
on 25 Jan 2016

0 Charterhouse champions self propulsion at BTME 2016 on stand B48

Self-propulsion seemed to be the order of the day on the Charterhouse Turf Machinery stand at BTME 2016. 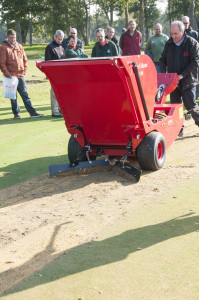 First up was the Core Collector 1200, the latest pedestrian machine from Redexim. Designed to collect cores, as well as debris after the use of a Graden scarifier, this new model features a 1.2m working width; increased hopper capacity and hydrostatic drive. Simple in operation, windrow boards at the front of the machine move the cores/debris into a line and feeds them through to a stainless steel blade. From there they are conveyed into the 0.3m3 hopper, which lifts to a height where the collected material can be tipped into a trailer or utility vehicle.

Next up, the Redexim Pedestrian Carrier, a power unit introduced in response to demands for machines that omit low ground pressure. The Carrier is a simple to operate, 3-wheeled hydro-static unit, powered by a 32hp V-twin petrol engine. It has a 3 point linkage; PTO and is capable of carrying a variety of machines that fall within its lift capacity. Already a success with football stadiums, Charterhouse brought it to BTME confident of it finding a home on golf courses. One home being Sheringham Golf Club where Head Greenkeeper, David Childs, is one of the first UK courses to take delivery of the Carrier. "We were recommended to look into a pedestrian aerator by our new course consultant when looking into improving aeration on our greens. We only have one tractor so the idea of using the Redexim Carrier with our Verti-Drain 1513 as well as our Verti-Seed would effectively free up the tractor for other jobs," explained David. "We have found this power unit, when compared to others we looked at, gives us fantastic speed between greens and allows the attached Verti-Drain to work at great depth - it also leaves a much smaller footprint. We are pleased to have added it to our machinery fleet and aim to use the Carrier with the Verti-Drain on the greens, tees and approaches at least once a month."