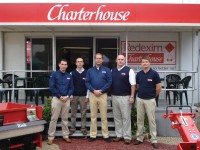 Charterhouse Turf Machinery was founded in 1982 by two young men who went on to become industry stalwarts. Philip Threadgold and David Jenkins were, at the time, working for Marshall Concessionaires in Northamptonshire. As well as being the Jacobsen dealer for the region, in the company's portfolio was a rather unusual machine from Holland - an early Verti-Drain.

When Marshall's experienced financial difficulties, Philip and David saw an opportunity to market the Verti-Drain in the UK, and set up Charterhouse Turf Machinery; their first offices being at the Old Mill in Godalming. They took the company name from the highly respected public school in the town.

I am at the company's modern premises in Haslemere to meet their General Manager, Nick Darking, a man who has 'grown up' with the company, to chart its history.

The idea for a heave action aerator had come just a few years earlier when a Redexim engineer, whilst watching a football match, observed a team of groundsmen walking line-abreast down the pitch, plunging in forks to the full depth of their tines, whilst pulling back on them to open up the surface. It was, Nick says, a light bulb moment.

Just two years later, the first Verti-Drain model was rolling off the production line in Zeist, Holland, the home of Redexim. That was 1980.

"The concept of a machine capable of heave aeration was brand new, and the first thing Philip and David needed to do was to 'get it out there'," says Nick.

"At that time there was only one Verti-Drain model, the very large 2.5m machine requiring a 75+ HP tractor with creep speed or hydrostatic," explains Nick. "These tractors were not common in the UK, so they not only had to sell a machine, but also a tractor. This was a big investment, so the duo concentrated on selling to professional grounds maintenance contractors. People like John Mallinson, Cliff Evans and Paul Seward were amongst their first customers." 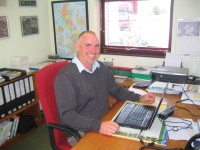 "They all found that they were able to make a good return and helped to spread the word."

"The first non-contractor sale was to Ascot Racecourse, with Gordon Hiscock, the Ascot bailiff, giving Philip the order on the same day as the demo. It just happened to be Philip's birthday as well!"

Two years later, a 1.5m model was introduced, which was able to work on the back of a smaller tractor. "David was very much the marketing man of the duo and, from his contacts in the industry, was able to persuade two leading greenkeepers - Walter Woods and Jack McMillan - to try out the new model. The hope was that they would see the benefits and, by networking with their colleagues, start the ball rolling."

With endorsements from leading contractors, Walter and Jack, it wasn't long before machines were heading to sports grounds and golf clubs all over the UK.
In 1986, the company moved to larger premises in nearby Milford.

In 1989, as the business grew, larger premises were required and a plot of land was found in Haslemere, where purpose designed buildings were erected. The complex remains the company's headquarters to this day.

Here, they had begun to manufacture their own design products using sub contractors. These included spikers, seeders, dragmats and topdressers - the latter, along with Turfco, being one of only two models available to the UK market. "We would receive the bare fabrications and turned parts, and complete final assembly and painting on the premises," explains Nick. "These were niche products, something Charterhouse has always been involved in," he continues.

As time has moved on, Charterhouse now offer eighteen different models of the Verti-Drain, and the name has become as synonymous with heave aeration as Hoover has to vacuuming and Biro is to ballpoint pens. "It is a source of some amusement that manufacturers of similar products still get a bit peeved that their models are referred to as 'verti-drains'," says Nick with a wry smile.

"The timing wasn't perhaps the best," bemoans Nick, "as the country was heading into the recession of the early nineties. The banks that had been keen to lend us money in 1989 decided, just one year later, that we needed more capital, so an investor was sought. This turned out to be Redexim, who became shareholders in 1993, followed by an amicable purchase by them in 1997." 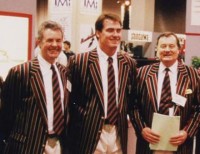 David and Philip remained at the helm as Managing Director and Sales Director respectively.

By this time, with Nick firmly established as one of the company's top sales demonstrators, the team took to wearing their infamous striped (some would say garish) jackets at shows and events. "It was David's idea," Nick states, almost accusingly. "He was always the marketing man, and saw them as an opportunity to create an identity and, to be fair, it worked. We don't wear them anymore, preferring more traditional corporate clothing, although we still have them, and they are often borrowed by the staff for fancy dress outfits - there was no ceremonial burning!" exclaims Nick.

With the acquisition by Redexim, manufacture of the Charterhouse product range was moved to Holland where it was refined, redesigned or retired as their designers saw fit.

Some notable industry figures have worked for the company over the years, including David Withers and David Watson. "I was the two Davids' dogsbody when I first came here," says Nick. "They were our sales demonstrators, so I spent my time loading and offloading machines and carrying out minor repairs. I'm not allowed anywhere near a spanner these days though!"

Other notables include Richard Heywood and the 'effervescent' Colin Gregory - Mr Tractorman - who was responsible for launching the Italian made Antonio Carraro tractors to a wider UK audience. 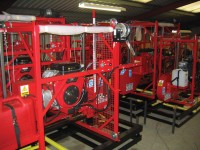 Similarly, the Charterhouse Richmond mail order business is now owned by Surrey Power, running out of the Haslemere site. "As the internet has taken over, it became less a mail order company and more a consumer dealership," says Nick, "so the decision was a straightforward one."

In 2001, David Jenkins moved to pastures new, but his Charterhouse swansong was a press trip to the Theakston Brewery in Ripon during BTME Harrogate - not a bad sign off (hic). Philip took over the role of Managing Director.

In August 2007, Philip was taken ill and rushed to hospital, which resulted in him retiring from the business in May 2008, although he remained as a consultant for a short period afterwards. I am happy to report that he is now back to full health and enjoying his retirement.

With the departure of the last of the founders, Nick was promoted to General Manager, responsible for the day to day running of the business, with Herman de

Bree overseeing both the UK and European operations. Geoff Burgess is CTM's Financial Director who has been with the company since 1992. He acts as a direct link to the Redexim board as Group Director.

"Philip's departure was quite sudden, as is often the way with health issues," says Nick, "and I was thrust into the limelight at Saltex, where I had to speak to the press. Using PowerPoint presentations and public speaking did not come easy, and I was rather nervous and bumbling at first (I can concur with that. Ed.) Now though, I take it in my stride. Well, almost!"

In 2005, Charterhouse introduced their extensive range of machines for synthetic surfaces. These include toppers, groomers, brushes, rakes, combs and brooms - all with the Verti prefix. 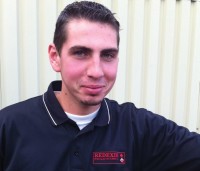 "The machines were designed and developed in Holland," explains Nick. "Curtis Allen heads up that section of the business, and has made great strides in educating groundsmen about the need to perform regular maintenance work on their synthetic surfaces."

Charterhouse are supporters of the industry, both high profile and behind the scenes. They are regular exhibitors at the two industry shows and are joint sponsors, with Kubota, of BIGGA's National Golf Championship, and The Best Maintained Artificial Surface category at the IOG Awards.

There is a lot we do behind the scenes as well," says Nick. "For example, you may remember that, a while back, Peter Knight of Bury Turfcare was involved in a serious road accident whilst transporting his Verti-Drain along a main road behind his tractor. A lorry went up the back of him, writing off the Verti-Drain - and Peter nearly, as well! Once he was back working again, we lent him a Verti-Drain until his insurance claim was resolved."

"We have always marketed ourselves as a big company," explains Nick. "Yet, in truth, we are not. We have always had good marketing skills, and the strength of 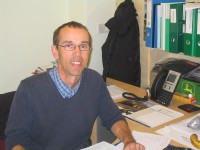 Redexim's research and development makes us a force to be reckoned with. Whilst we are not a 'family' business in the true sense of the words, I believe we have the ethos of one. People are important - our clients and our employees."

One long serving colleague of Nick's is Technical Manager, Tim Franklyn, who has been with the company for twenty-one years. "There's nothing he doesn't know about our machines so, if there is ever a problem, let him know. Although it's him who told me to stay away from the spanners!" exclaims Nick.

Charterhouse Turf Machinery are certainly entering their fourth decade a leaner version than the manufacturing company of twenty odd years ago. The expertise of the collective Redexim Charterhouse team looks set to come through the current recession with flying colours; mainly red!

Now, where did I put that Hoover?