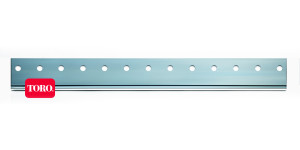 With the new season's early cut out of the way, and late spring/summer's flush of grass growth still to tame, now is the ideal time to check for worn bedknives, says turfcare specialist and Toro distributor Lely UK.

Following their work carried out during last year's season, topped with light mowing in the autumn and winter, Dan Dubas, sales and marketing for Toro Parts at Lely, warns that the likelihood mower bedknives are now damaged or blunted is high; a situation that needs addressing before tackling high season.

"To achieve the best cut and after-cut appearance, we highly recommend checking the condition of your mowers' bedknives now," says Dan. "This will prevent discovering, after it's too late, that bedknives are too worn to use, which results in wasted time waiting for replacements."

Adding that replacing bedknives as a set is crucial for an even cut, he says: "When ordering bedknives end-users have the option of buying a 'set' to replace the whole mower's cutting unit bedknives, or replacing just one.

"However, we wouldn't advise the latter. Replacing just one leads to time spent adjusting the old bedknives to match new ones in an attempt to create that even cut everybody wants. In reality, replacing as a set is the only true way of achieving the most even cut."

The other option is to re-grind old and worn bedknives back into condition, Dan points out. "Prolonging the lives of bedknives may seem like the most cost effective solution. However, as genuine Toro bedknives are low cost, it's often deemed more cost effective to simply replace for new, avoiding the third party service costs, or man hours if in-house, required to grind and adjust into position," he explains.

The genuine Toro bedknife has been precision-engineered for a superior quality of cut. Every bedknife Toro manufactures is designed to meet strict Toro engineering specifications to ensure the best quality of cut and after-cut appearance, and to last as long as possible until replacement.

"Genuine Toro bedknives provide a true flatness of the knife, extending their life and maximising the quality of cut," Dan adds. "They're also made of high carbon steel for ultimate durability and longevity; retaining their edge longer means greenkeepers can mow longer without need to adjust or replace frequently."