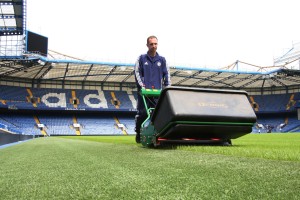 Having recently returned to Chelsea FC as the first team manager, all eyes have been on Chelsea and Jose Mourinho since the new Premier League season began in August.

Kevin's relationship with Dennis stretches back to 2003 when the club purchased their first G860 34" mower. "When we first saw the G860 we just loved the versatility of the interchangeable cassette system - one machine can complete a range of jobs.

Its combination of size and flexibility make it very easy to handle and lightweight so it doesn't damage the playing surface."

Built on the FT principle the Dennis G860 professional mower has an interchangeable cassette system, with one minute changeover, giving options to fit 6 different types of heads including scarifiers, verticutters, brushes, spikers, and slitters as well as 6 or 8 bladed cutter cassettes and are used in high class arenas around the world.

Kevin says that it made sense to have the flexibility of working with a series of cassettes on one machine rather than purchase a series of machines.

His range of cassettes include six and eight bladed cylinders, verti-cutter, soft bristle brush and a tungsten tipped verti-cutter, which cut down on not just purchase costs but also service costs.

"The ease-of-use and versatility to change cassettes in under a minute is probably its best feature. I also like the tungsten tipped verti-cutter cassette which is excellent at pulling out all the dead material and doesn't allow thatch or organic matter to build up on the pitch - it's like giving the pitch a mini renovation every time we use it. After a match we also use the brush to sweep up any debris laying on the surface."

Renowned for their exceptional build quality, Kevin also says that he's received an excellent service from Dennis every step of the way: "Robert Jack, our Area Sales Manager has been excellent. Nothing is ever too much trouble for him.

The quality of the Dennis mowers we've used has always been exceptional and the results that we've had with them have been fantastic.

"We've set very high standards and want the best possible surface here at Stamford Bridge and that includes having the best maintenance equipment to look after it.

In my opinion, there is no better machine for stadium use and Dennis is a key supplier for pedestrian machines here. We wouldn't have used them for the past ten years if they weren't the best football pitch mower on the market."