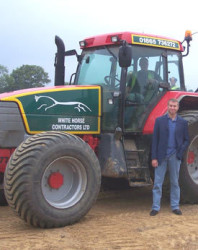 Works on site commenced in April 2004 and were substantially completed in October. In an interesting turn of events, the construction work on site ceased for a 3 weeks period whilst an archaeological dig was undertaken throughout the whole area.

In total some six full size football pitches were constructed. A huge logistics exercise was undertaken as more than 20,000 tonnes of topsoil had to be removed from site and even greater volumes of aggregate, sand and rootzone imported. This was organised and controlled entirely by White Horse Contractors management and workforce who offered the experience and the specialist plant and equipment required to undertake projects of this complexity and status. The pitch construction was, as one might expect, to a very high specification, the design of which was provided by John Hacker of Professional Sportsturf Design.

Following the topsoil removal, the areas were laser graded using a D6M LGP Bulldozer, after which came the installation of both a comprehensive drainage and irrigation system. Over 12,000 metres of drainage pipe were installed to ensure year round playability controlling not only what precipitation may occur but also a high and seasonally variable water table.

A 100mm depth gravel carpet was laid using 6mm gravel over a geotextile protected formation. The pitches were then constructed in layers using the following - firstly, lower rootzone sand to 150mm depth, then upper rootzone mix of 125mm depth and finally 25mm of fibre sand was incorporated into the surface upon which 65,000m² of special washed turf was laid. The club's decision to use turf rather than seed was to ensure that the pitches were brought into use for the 2004/2005 season. The turf was laid by Talbot Farm Landscapes, sub contracted to White Horse. 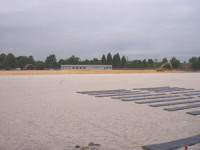 This bespoke construction provided the contractor with the opportunity to work with new and innovative technology and utilise experiences learned from previous contracts of this scale. For the client, Chelsea Football Club, they now have a facility, which would be the dream of many clubs. This investment for the future will undoubtedly serve them well.