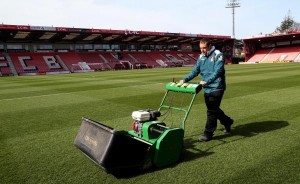 Cherries fans are being urged not to invade the pitch after Monday's crucial game against Bolton - because it could jeopardise the club's chances of winning a 'Pitch of the Year' award.

The Goldsands Stadium pitch, which has been in top-notch condition all season, has now officially been recognised as one of the best three playing surfaces in the Championship.

The Cherries are up against rivals Charlton and Rotherham in the final shortlist of the Groundsman of the Year awards and will know on Thursday, April 30 whether they are the overall winners.

But head groundsman James Lathwell is concerned that the pitch's quality could be compromised if supporters stage a pitch invasion after the final home game of the season.

Supporters are normally keen to set foot on the "hallowed turf" after the final home game of the season and, whatever the result, many will want to celebrate AFC Bournemouth's best ever season.

"It is a great honour to be named in the final three of this category, especially when you consider that a lot of clubs in the Championship have been in the Premier League recently," he told afcb.co.uk.

"We did a lot of research prior to its installation last summer to ensure the pitch would perform well regardless of what the British weather throws at it, and myself and the other groundsman have worked continuously to ensure it has remained in pristine condition throughout the season.

"However with the winner not being announced until 30th April, we would ask supporters to support us in our bid to be crowned overall divisional champions and refrain from entering the pitch after the game against Bolton."

The pitch of the year accolade is based on match reports from referees and scores allocated by opposition managers visiting the Goldsands Stadium, followed by an independent inspection that took place earlier this month.

James recently told the Echo: "We're up amongst the best, which is good. There are not many clubs that have come here and not complimented us on the pitch and some say it's the best they have played on all season."