0 Cheshire firm is Turfmech's dealer of the year for 2005

Cheshire firm is Turfmech's dealer of the year for 2005 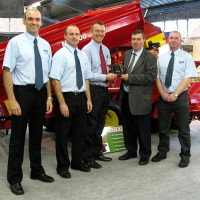 Initiated in 1999, Turfmech's dealer of the year award was presented to Turner Groundscare's Tarvin branch in recognition of the outstanding sales results achieved by the firm during 2005 together with the consistently high level of service provided to owners and users of Turfmech machines.

Presenting the award, Turfmech's managing director, Austin Jarrett, commented that Turner Groundscare's continuing success was due reward for the company's exceptional efforts in promoting and supporting Turfmech products over the six years ago since it first became a Turfmech dealer.

"Thanks to Turner Groundscare, we have machines at work with local authorities, contractors, golf clubs, hire firms and private customers throughout Cheshire, Flintshire, Greater Manchester and Merseyside," he said. "The feedback we receive tells us that Turner Groundscare delivers consistently high levels of after-sales support to its professional customers, support which has resulted in new and repeat sales of Turfmech machines over the years.

In response, Brian Spruce of Turner Groundscare pointed out the company enjoyed a first-class business relationship with Turfmech and its staff. "From product demonstrations and technical assistance to responding to parts and service requests, we know that Turfmech will never be found wanting. Turfmech sets a high standard for others in the industry to follow."

In addition to its award-winning retail branch at Tarvin, Cheshire, the Turner Groundscare group has sales and service branches at Bledlow in Buckinghamshire, Dunstable in Bedfordshire and at Erdington, a north-eastern suburb of Birmingham. All hold the Turfmech franchise as well as being main John Deere groundscare dealers.